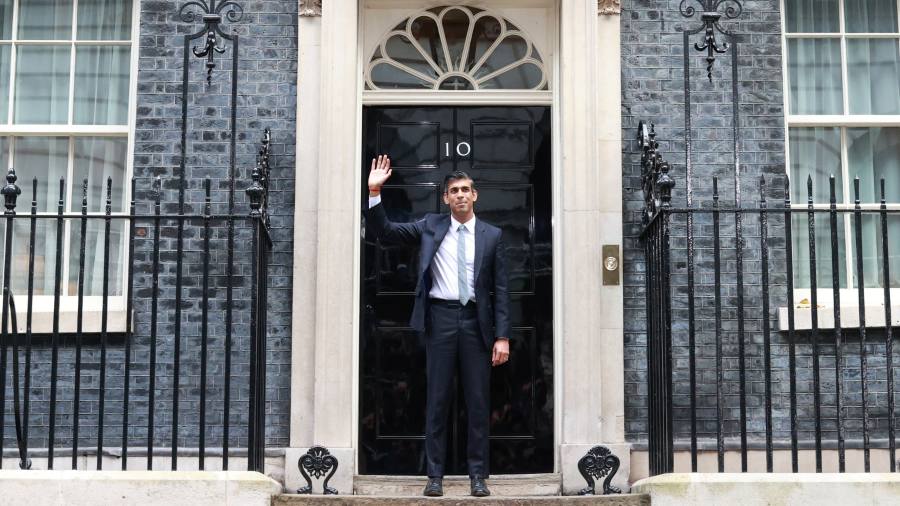 Rishi Sunak on Tuesday became Britain’s third prime minister in the space of two months and immediately started to assemble a “unity cabinet” to tackle “the profound economic crisis” facing the country.

Sunak, who was invited to form a government by King Charles on Tuesday morning, said he would prioritise “economic stability and confidence” but said: “This will mean difficult decisions to come.”

Jeremy Hunt, the man charged with clearing up the economic mess left by Liz Truss’s calamitous 49-day premiership, will remain as chancellor and will present a debt-cutting plan in the coming days.

In an attempt to stabilise the governing Tory party after months of chaos, Sunak retained a number of senior ministers who had backed an abortive comeback bid by former prime minister Boris Johnson.

In a move that astonished some Tory MPs, Sunak made Suella Braverman home secretary, only six days after she resigned from Truss’s government after a security breach and a row about immigration levels.

Braverman’s appointment was seen as a concession to the pro-Brexit Conservative right but was billed by Sunak’s allies as evidence of his desire to build “a unity cabinet using all the talents of the party”.

James Cleverly, another Johnson supporter, remains foreign secretary in a cabinet that broadly maintains a balance between Brexiters and Remainers in the higher echelons.

Michael Gove, who was fired by Johnson this summer shortly before he was ousted as prime minister, returned as secretary of state for levelling up, housing and communities.

Dominic Raab, a Sunak ally, became deputy prime minister and justice secretary, but Penny Mordaunt, who challenged Sunak for the Tory leadership, remained in the low-profile post of Leader of the House of Commons.

Sunak arrived in Downing Street after several months of turmoil. Johnson resigned in July following a series of scandals while Truss, who became prime minister on September 5, quit after her economic policy had to be unwound when it sent markets into a tailspin.

The former chancellor said Truss had made mistakes and he was standing in Downing Street “in part, to fix them”. But already there were signs that his election as Tory leader has eased the turmoil in the markets.

In contrast to Johnson’s shambolic administration, Sunak promised: “This government will have integrity, professionalism and accountability at every level.”

Aged 42, he is Britain’s youngest prime minister in modern times and the first British-Asian person to lead the country. Sunak has been an MP for only seven years and is about to be tested in extremely tough political circumstances.

With opposition parties demanding an immediate general election, Sunak claimed he derived his legitimacy from the 2019 Tory manifesto, upon which Johnson built an 80-seat majority.

The new prime minister said he would deliver that manifesto’s commitments on a stronger NHS, safer streets, better schools, environmental protection and the “levelling up” of regional inequalities across Britain. “I have work to do to restore trust after all that happened,” he acknowledged, but insisted: “I am not daunted.”

Earlier, Truss gave her final speech as UK prime minister, urging Sunak to be “bold” and making no apology for the chaos that engulfed her party and the markets during her brief time in office.

Truss made no mention of her disastrous September 23 “mini” Budget, with its £45bn of debt-funded tax cuts. Sterling plunged, gilt yields rose, the Bank of England was forced to intervene and she sacked her chancellor.

Hunt wants to unveil a new fiscal plan next week, showing how the government will cut debt as a share of gross domestic product in the medium term, ahead of a Bank of England decision on interest rates on November 3.

A date for the statement will be announced after Sunak chairs his first cabinet on Wednesday. He faces big challenges, including the UK economic downturn and cost of living crisis, the repercussions of Brexit and Russia’s invasion of Ukraine.

Sir Keir Starmer, the Labour opposition leader, warned his shadow cabinet at a meeting on Tuesday morning that Sunak would enjoy a “significant poll bounce” after the main UK opposition party had built a lead of more than 30 points in some polls over the Conservatives in recent weeks.

“No one in this room ever thought the polls were anything but an enjoyable story. That’s why we’ve said all along: no complacency, no caution, no letting up,” Starmer added.