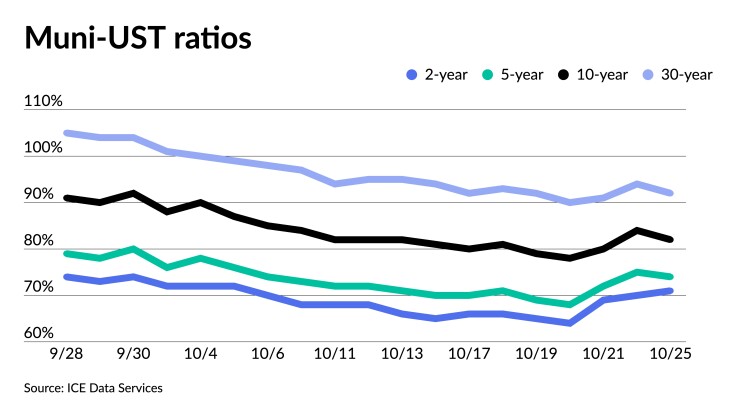 Munis were mixed Tuesday as the secondary took a backseat to the larger primary that began pricing, while U.S. Treasuries whipsawed into a rally as economic data signaled the Federal Reserve’s actions are cooling the economy while equities improved on better corporate earnings.

Triple-A yields were little changed to weaker by a basis point or two while Treasury yields fell by 15 basis points on the 10-year to close the session.

Muni to UST ratios rose slightly as a result of the moves, improving relative value, after munis have mostly outperformed UST of late.

With the muni outperformance, he said, “comes less relative value across the tax-exempt curve,” particularly out long.

Lipton said “retail investors are showing interest in the attractive cash-flow opportunities offering equity-like returns,” and he expects “retail to remain involved with rates moving potentially higher, but the opportunities may very well come with unforeseen volatility and so appropriate entry points with an understanding of call optionality must be key to the investment calculus.”

He said market participants were “greeted with a sizable calendar last week with another heavy plate of offerings lined up for this week.”

“Pre-sale orders came with a number of well-known market stalwarts and overall, deals received favorable reception,” Lipton said. “Strong carry-through in the competitive market with active bidding is expected this week as we will continue to see large household names in the mix.”

Last week’s negotiated business was “priced somewhat cheaper with many deals being bumped on the reprice,” and certain names were oversubscribed, he said.

“Return seeking institutional interest was visible on the front end prior to Friday’s heavy scale adjustments,” he noted.

Lipton said liquidity was “pressured before the end-of-week cuts, yet became close to non-existent just after.”

Nevertheless, he said, overall liquidity in the muni market “has not been as thin as the liquidity experienced in other areas of fixed income, despite consecutive weeks of muni fund outflows.”

“Demand for muni product seems to respond well to an 18% decline in new-issuance year-over-year, and it is this technical backdrop which seems to be driving muni outperformance year-to-date,” according to Lipton.

Munis worth the wait?
“Conflicting value versus trend dynamics have made day-to-day price trends more volatile; however, this creates opportunities for accounts that can manage near-term paper losses,” said Matt Fabian, a partner at Municipal Market Analytics.

In effect, he noted, at least $170 billion of munis have relocated to new holders this year, which includes $97 billion of fund outflows, inclusive of both long-term funds and exchange-traded funds, and $70 billion of excess tax-exempt issuance.

“With dealers limited — by more onerous capital charges and more conservative risk management — from ferrying this migration for very long, it follows that all of the $170 billion has already found at least a semi-permanent allocation elsewhere,” he said.

“Assuming a material portion of this found demand is less trading oriented [and] more laddered/separately managed account strategies, secondary volumes, once stability returns (at some point in 2023), may be sparse,” Fabian noted.

But even if the 2023 tax-exempt primary is $350 billion to $400 billion, he said $240 billion of that is already spoken for via scheduled amortization/reinvest.

“This suggests a faster pricing rebound, achieved via fewer traded bonds, once that stability occurs: a tantalizing prospect for current and ostensible holders who, before anything happens, must still digest more basis points of loss while the Fed keeps raising rates,” he said.

The best prospects are now at the intermediate and long ends “where the larger new-issue calendar has required highly concessionary primary offered levels,” Fabian said.

Since most of the curve reads this way, it suggests that issuers “with the ability to wait a few months” to issue debt, “should strongly consider doing so.”

California, coming with $1.2 billion of general obligation bonds in the competitive market, and the New York City Transitional Finance Authority’s $1.3 billion of exempt and taxables, will test the primary Wednesday.