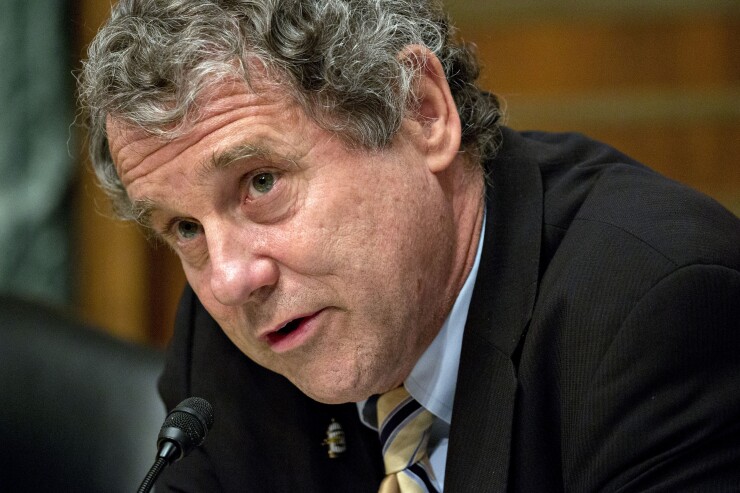 In a letter sent to Fed Chair Jerome Powell on Tuesday, Brown, who chairs the Senate Banking Committee, advised the central bank not to “lose sight” of its mandate to maintain full employment in pursuit of tamping down inflation.

“While, for now, the labor market remains relatively stable, we are starting to see job openings decrease and unemployment claims rise,” Brown wrote. “We must stay focused on addressing the root causes of inflation without putting workers’ livelihoods at risk.”

The Fed has received Brown’s letter and plans to issue a reply to the senator, a Fed spokesperson told American Banker.

Brown’s letter comes as concerns mount from economists, analysts and policymakers — including Federal Reserve Bank of Kansas City President Esther George — about the Fed tightening monetary policy too much and too quickly.

Since March, the Fed has raised its benchmark interest rate by 3 percentage points in an attempt to temper demand in the economy and bring down 40-year-high inflation. The effort has included interest rate hikes of 75 basis points after each of the past three FOMC meetings.

Financial markets are broadly expecting another 75 basis-point hike after next week’s meeting, which is set to take place on Tuesday, November 1 and Wednesday, November 2.

Brown did not comment on any specific projections for the Fed’s next monetary policy adjustment. Instead, he argued that the Fed’s main tool for addressing inflation — adjusting interest rates — is inexact and inefficient in terms of dealing with the underlying causes of rising prices.

He implored Powell not to repeat what he views as mistakes made by past Fed chairs by tightening conditions too much, to the point where employers cut back on their workforces.

“We must avoid having our short-term advances and strong labor market overwhelmed by the consequences of aggressive monetary actions to decrease inflation, especially when the Fed’s actions do not address its main drivers,” he wrote.

Brown argued that congressional remedies to supply side disruptions should be given time to work their way into the economy, highlighting the health care and fiscal components of the Inflation Reduction Act, as well as the Ocean Shipping Reform Act as mechanisms for reducing costs.

Brown also raised another frequently cited concern that the Fed’s actions, when combined with similar actions taken by central banks in other leading economies around the world, could become destabilizing to financial markets.

“Unfortunately, there is a strong chance these simultaneous individual efforts will amplify each other and produce greater than intended consequences,” Brown wrote. “This risk of combined policy response and uncertainty from exogenous events, such as Russia’s illegal war against Ukraine and the anti-competitive actions by cartels like OPEC, creates the real possibility of worsening the global economic situation.”

Stocks making the biggest moves midday: American Express, Intel, Silvergate Capital and more
Lido Protocol Reveals Plans for Withdrawal Feature Ahead of Ethereum’s Shanghai Hard Fork
Hackers take over Azuki’s Twitter account, steal over $750K in less than 30 minutes
Rent prices have dropped the most in these 5 U.S. metro areas. Why it’s cheaper to rent in many markets
Mega-mergers stand out amid a 2022 dip in hospital consolidation