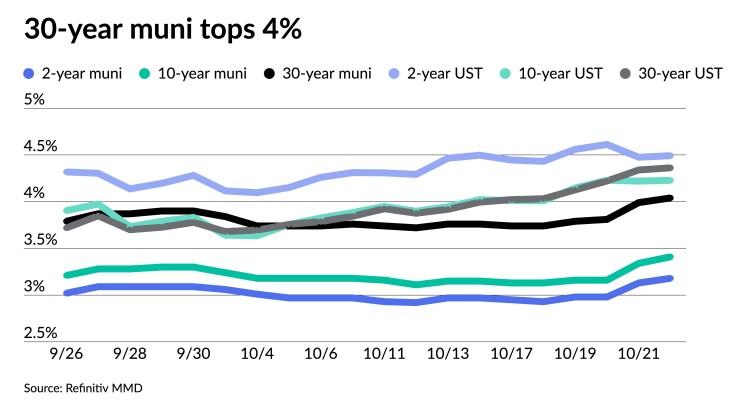 Triple-A yields rose three to seven basis points, depending on the scale, while Treasuries saw larger losses out long.

“Fed members last week suggested short-term rates may have to be increased to 5% for the Fed to get inflation completely under control,” Miller and Nuveen’s Chief Investment Officer and Head of Global Fixed Income, Anders S. Persson, said.

USTs sold off accordingly, with the 10-year yield reaching 4.24%, which had not been seen since October 2008, Miller and Persson said. Munis sold off Friday after being relatively stable for most of the week.

“Many investors believe the Fed is being overly vigilant on inflation, but also that the Fed was too cavalier earlier this year,” Miller and Persson said. “We see signs of a cooling economy, believe rates will crest in early 2023 and anticipate volatility will continue.”

Selling pressure remains elevated due to the volatility in UST.

Last week’s daily average of $2.1 billion was 13% higher than the week prior and 79% above the one-year daily average, they said.

The average daily par amount traded last week was down 10% from the pace of the previous week but was still 16% higher than the one-year daily average, they said.

Jason Wong, vice president of municipals at AmeriVet Securities, noted that secondary trading “continues to be very volatile with over $47.5 billion of secondary volume.”

With yields moving higher, trading volume should continue to be at elevated levels, he said.

Munis should be supported “by an eventual moderation in inflation and the likelihood of a soft U.S. economic landing or mild recession,” Miller said. Interest rate volatility should lessen, “leaving the market at attractive yield levels both on a relative and absolute basis,” he said.

Investors, Miller noted, should be enticed by the value created in the market due to solid fundamentals and healthy issuer credit conditions.

This week, though, Nuveen said the larger new-issue calendar will need to be priced cheaply to pique investor interest.

Treasuries were weaker on the long end.