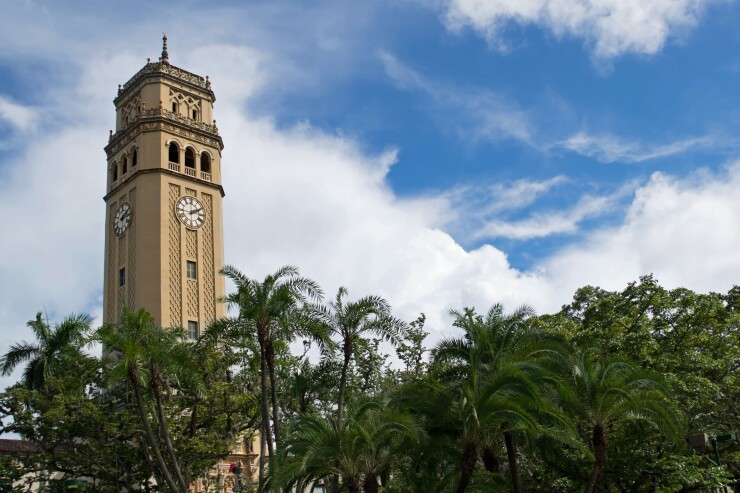 With the University of Puerto Rico under increasing financial pressure, the full payment of its roughly $365 million in bonds appears to be under threat.

The university has continued to pay debt service on its bonds since the 2016 passage of the Puerto Rico Oversight, Management, and Economic Stability Act that set up the bankruptcy proceeding for the territory’s government and agencies. But there are indications that full debt service payments may end soon and, at the least, they are under increased pressure.

According to the Oversight Board’s May 2021 fiscal plan for the university, if the school did not take steps to increase revenues and cut expenditures it would face pre-debt service operating deficits growing from $337 million in fiscal 2021 to $455 million in fiscal 2026. The plan said the university, burdened with declining enrollment, deferred infrastructure and maintenance needs, operational inefficiencies, and high pension liabilities, should restructure its bond debt.

Even if the university successfully executes the plan’s reforms, it would not have enough money to spare to fully pay its contractual debt service, the board said.

Complicating matters for the university are concerns about how a default or bankruptcy would impact accreditation or federal financial aid for students.

It is federal policy to permanently deny federal financial aid to students who attend colleges or universities that go through Chapter 9 or similar bankruptcies, she said.

The few higher education institutions that have filed for bankruptcy were simply closing down, rendering those concerns irrelevant. UPR has no plan to close.

On the other hand, the U.S. Department of Education wants to keep college education available to a wide swath of high school graduates and UPR is Puerto Rico’s primary provider of higher education. If UPR were to avail itself of either the Title III or Title VI bankruptcy provisions of PROMESA, it remains to be seen how the department would handle it, she said.

UPR and the Puerto Rico government’s Fiscal Agency and Financial Advisory Authority said in a joint statement that it would neither confirm nor deny negotiations with bondholders. They also declined to comment on whether UPR would restructure its debt.

After commencement of the Puerto Rico’s central government Title III bankruptcy, FAFAA on behalf of UPR and U.S. Bank, NA, trustee for the university’s bonds, entered into a litigation standstill agreement, under which FAFAA and UPR continue to make payments and the trustee refrains from calling a default on the bonds.

The original 2017 standstill agreement has been extended 16 times, most recently in June, running through Nov. 30.

“UPR has had discussions with respect to a restructuring of the revenue bonds,” the Oversight Board said in a statement provided Friday. “The Oversight Board endeavors to reach consensual solutions for each debtor before resorting to PROMESA Title III or Title VI restructurings, though these options remain if UPR’s pension or other debt issues cannot otherwise be fully resolved.”

S&P Global Ratings rates all the University of Puerto Rico bonds CC with a negative outlook. For S&P CC means it “expects default to be a virtual certainty, regardless of the anticipated time to default.”

On Oct. 5 the El Nuevo Día news web site said Puerto Rico Secretary of the Treasury Francisco Parés met with FAFAA Executive Director Omar Marrero and Gov. Pedro Pierluisi. After the meeting it quoted Parés as saying that UPR must restructure its debt. The Puerto Rico Treasury Department did not respond to Bond Buyer efforts to confirm this statement.

According to El Nuevo Día story, Marrero suggested that UPR could refinance its debt as the Puerto Rico Aqueduct and Sewer Authority did in 2020 and 2021. However, given the university’s more dire financial situation combined with the substantially higher interest rates that have prevailed in recent months, the university may have a hard time achieving substantial debt service savings through a market refinancing.

The university has Series P and Q revenue bonds and supports Series 2000A Desarrollos Universitarios, Inc. AFICA bonds. None of the bonds are insured, according to FAFAA, and only $8 million is held by on-island residents, according to Bonistas del Patio Executive Director Jorge Irizarry. The Series P bonds mature in 2030, the Series Q in 2036, and the DUI bonds in 2034.

Despite the pressure on the university and the signs of a possible restructuring, the bonds continue to trade at fairly strong levels. The Series Q were initially offered at about 106 cents on the dollar and in the last six months those bonds maturing in 2036 were trading at 92 cents to 99 cents, according to trade data reported on the Municipal Securities Rulemaking Board’s EMMA website. Some of the lowest value trades have taken place in the last few weeks.

When four Puerto Rico experts were asked if the university should restructure its bonds, three said it should and a fourth remained noncommittal.

“Fiscal discipline and debt restructuring should be enough to save the UPR from collapsing,” said José Garriga Picó, a political science professor at the university, who served in the territory’s Senate from 2005-2008. “But the questions are: 1) will the UPR be able to raise funds to pay the remaining debt, and 2) will the institution maintain fiscal discipline in the face of mounting pressure from workers, professors, and students for better salaries and services? The UPR is a political time bomb.”

Philip Escoriaza, former general counsel for the university’s flagship Río Piedras campus in San Juan, said he believed UPR would restructure its debt. “The devil is in the details and what form this UPR debt restructuring will take, whether a Title III debt adjustment action or a type of debt modification under Title VI,” said Escoriaza, who is senior counsel at Feldesman Tucker Leiffer Fidell and who owns houses in Puerto Rico.

Puerto Rico economist Heidi Calero said the bonds’ principal should be cut by 70% to 80%. But Calero, president of H. Calero Consulting, said more than a debt haircut, UPR needed a strategy for improvement.

“The UPR’s challenges are not only financial but also demographic,” Advantage Business Consulting President Vicente Feliciano said. “There are too few high schoolers with many schools closing over the past several years. One way out would be to reduce the size of the university to accommodate present demographic trends, fewer campuses, fewer students, and the same amount of transfers from the central government would solve UPR’s demographic and financial challenges in one go.” The university has 11 campuses.

“The alternative being pursued is to lower admission standards in an attempt to maintain enrollment,” Feliciano said. “The result so far has been a steady but not steep decline in enrollment. Thus, you end up with a lower quality student body, fewer tuition paying students and the same cost level. And you solve neither the demographic nor the financial challenge.”

Unpopular moves such as closing campuses could trigger protests that some fear would impact the university’s continued accreditation.

The accreditation body, the Middle States Commission On Higher Education, placed UPR on probation in May 2017 in the midst of months-long student strikes that shut down the university during the period the territory was entering bankruptcy. The accreditation was reaffirmed in 2019.

According to the board’s certified fiscal plan for UPR, the university has the following challenges: setbacks due to the COVID-19 pandemic; declining enrollment due to reduced number of college-age people in Puerto Rico; decreasing Puerto Rico government appropriations for the school; a long-time inability to identify other sources of revenue; an operationally inefficient footprint; an inability to do adequate infrastructure and maintenance investment; an increasing unfunded pension liability; and longstanding challenges in centralizing financial controls.

The university’s pension system has a $3.2 billion liability, of which $1.8 billion is unfunded. In fiscal years 2018, 2019, and 2021 the university’s contribution to its pensions was between 27% and 55% short of the actuarial required contribution.

As of spring 2021 the university had Other Post Employment Benefit liabilities and accruals for compensated absences of $358 million.

The plan said the university has been spending well below budget on capital expenditures. Further, it has not been employing much of the federal disaster relief funds made available to it.

To address these and other problems, in the plan the board proposed operational efficiencies, revenue enhancement and diversification, pension reform, and fiscal governance and controls.

Taken together the plan’s revenue and expenditure measures could lead to annual improvement of $400 million per year. After measures, the board is projecting surpluses of $9.6 million to $22.5 million per year but this would be without any debt service.

First Solar (FSLR) and Saia (SAIA) Are Aggressive Growth Stocks
New York AG will seek sanctions on Trump, lawyers over ‘false’ court filings in fraud suit
Should You Follow Buffett & Buy Japan ETFs?
Mortgage rates drop to the 5% range for the first time since September
US shoots down Chinese spy balloon and moves to recover wreckage