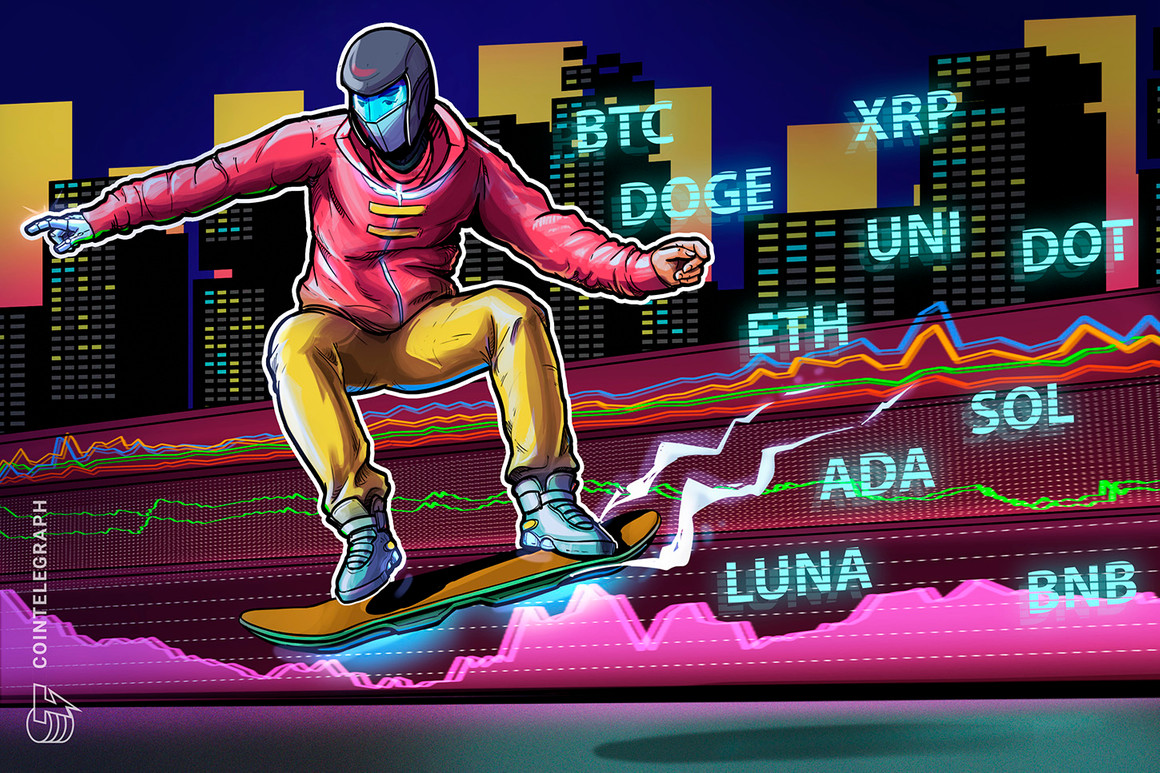 Bitcoin’s (BTC) failure to make a strong recovery in the past few days has resulted in profit-booking in most major altcoins, threatening to pull the total crypto market capitalization back below $2 trillion.

The U.S. equity markets witnessed profit-booking and the S&P 500 dropped by 1.69% last week, suggesting the development of a risk-off sentiment. Charles Edwards, CEO of investment manager Capriole, pointed out that “almost every Bitcoin correction in 2021” has corresponded with a 2% or more drop in the S&P 500.

Is Bitcoin in a firm bear grip and could this result in a sell-off in major altcoins? Let’s study the charts of the top-10 cryptocurrencies to find out.

Bitcoin once again turned down from the 20-day exponential moving average ($47,061) today, indicating that the short-term sentiment has turned negative and traders are selling on rallies.

The downsloping 20-day EMA and the relative strength index (RSI) below 43 suggest that the path of least resistance is to the downside.

Such a move could dim the chances of a strong recovery, keeping the pair stuck in a range for a few days.

Ether (ETH) has been sandwiched between the moving averages for the past few days. This suggests that bulls are buying on dips to the 50-day simple moving average ($3,129) and bears are selling on rallies to the 20-day EMA ($3,413).

The 20-day EMA is gradually sloping down and the RSI has dropped below 46, indicating that bears have the upper hand. If bears pull the price below the 50-day SMA, the ETH/USDT pair could witness further selling, resulting in a decline to $3,000.

This is an important support for the bulls to defend because a break below it could result in panic selling.

The bears have pulled the price back below the breakout level at $2.47 today. The downsloping 20-day EMA and the RSI in the negative territory indicate that bears have a slight advantage.

Binance Coin (BNB) closed below the 50-day SMA ($410) on Sep. 10 but bears could not sustain the lower levels. The bulls purchased the dip and pushed the price back above the 50-day SMA on Sep. 12.

However, the failure of the bulls to clear the overhead hurdle at $433 may have attracted a fresh round of selling today. If the price sustains below $393.20, the BNB/USDT pair could drop to $369 and then to $340.

The downsloping 20-day EMA ($438) and the RSI below 40 suggest that the path of least resistance is to the downside. The bulls will have to push and sustain the price above $433 to suggest that the correction could be over.

XRP is currently stuck between the moving averages. The failure of the bulls to push the price above the 20-day EMA ($1.13) has attracted profit-booking from short-term traders.

The 20-day EMA has turned down and the RSI has dipped below 45, suggesting that bears have the upper hand. If sellers pull the price below the 50-day SMA ($1.03), the XRP/USDT pair could challenge the Sep. 7 intraday low at $0.95.

A break and close below this support will suggest that the uptrend could be over. That may open the doors for a further slide to $0.75. This negative view will invalidate if the price bounces off the current level and rises above the 20-day EMA. The bulls will then try to push the price to the overhead resistance zone at $1.35 to $1.41.

Solana (SOL) is currently correcting in a strong uptrend. The break below the trendline suggests that the bullish momentum has weakened. The price could now dip to the 20-day EMA ($141).

If the price rises from the current level, it will suggest that the sentiment remains positive and traders are accumulating on dips. The bulls will then try to resume the uptrend but are likely to face stiff resistance at the trendline.

If the price turns down from the trendline, the SOL/USDT pair could drop to the 20-day EMA. A break below this level could sink the price to the 61.8% Fibonacci retracement level at $123.43.

Conversely, a breakout and close above the trendline will increase the likelihood of a retest of the all-time high at $216.

Polkadot (DOT) rose above the overhead resistance at $35.68 on Sep. 12, suggesting that bulls are attempting to resume the uptrend. The upsloping moving averages favor the bulls but the negative divergence on the RSI indicates that the bullish momentum may be slowing down.

The bears are currently attempting to pose a stiff challenge near the resistance line but if bulls do not give up much ground, the possibility of a break above the overhead resistance increases. That could clear the path for a rally to $41.40 and then $46.83.

Contrary to this assumption, if the price turns down and breaks below the 20-day EMA ($30.34), the DOT/USDT pair could retest the breakout level at $28.60.

A strong rebound off this level will suggest that bulls continue to accumulate on dips but a break below it could sink the pair to the 50-day SMA ($24.68). If the price sustains below $28.60, it will suggest that bears are back in the game.

Dogecoin (DOGE) has been trading below the moving averages for the past few days, which suggests that bulls are in no urgency to buy at current levels. The bears will now try to sink the price below the strong support at $0.21.

The 20-day EMA has turned down and the RSI has dropped into the negative territory, suggesting that bears have the upper hand. A break and close below $0.21 could pull the price to the critical support at $0.15.

Alternatively, if the price rebounds off $0.21, the bulls will again try to push the DOGE/USDT pair above the moving averages. If they manage to do that, the pair could rally to the downtrend line. A break and close above this resistance will be the first sign that the correction may be over.

A strong rebound off either level will suggest that the sentiment remains positive and traders are buying on dips. The bulls will then attempt to resume the uptrend and push the price to the psychological level at $50.

The upsloping moving averages indicate advantage to the bulls but the negative divergence on the RSI signals caution. If bears pull the price below the 20-day EMA, the LUNA/USDT pair could slide to the 50-day SMA ($24.14).

Uniswap (UNI) has been trading below the breakdown level at $25 for the past few days, which suggests that traders are not aggressively accumulating at the current levels.

The moving averages have completed a bearish crossover and the RSI is in the negative territory, indicating advantage to bears. If sellers sink the price below the immediate support at $21, the negative momentum could pick up.

The UNI/USDT pair could then drop to $18.69. This level may act as a support but if bulls fail to push the price above $25, the decline could extend to $13. This negative view will invalidate if the price turns up from the current level and rises above the moving averages.