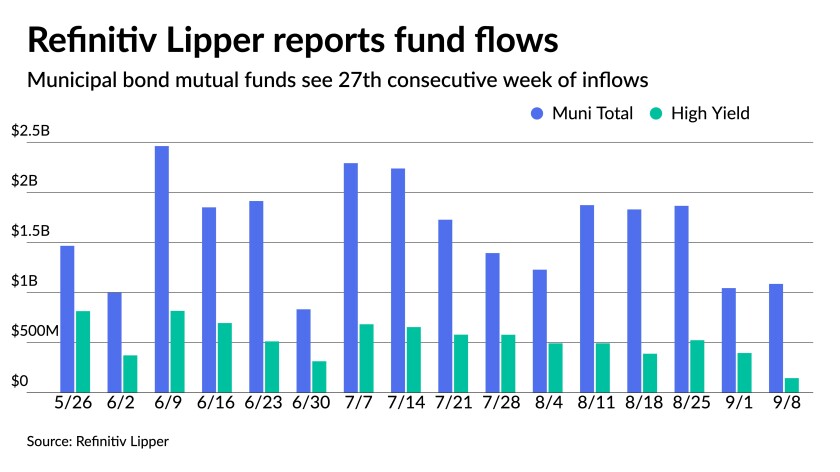 Municipals were little changed, underperforming a U.S. Treasury rate reversal from Wednesday as all eyes were on the primary with Minnesota selling $897 million of general obligation bonds to strong reception.

For the 27th straight week, Refinitiv Lipper reported inflows into municipal bond funds with investors putting $1.1 billion of cash into the mutual funds. High-yield saw $144 million of that amount, down from nearly $400 million the week prior, as high-yield has not been performing as well as earlier in the summer.

The Bloomberg U.S. Municipal Index is down 0.03% for the month, high-yield index is flat and taxables are down 0.12% so far in September.

Even with the lower reported inflows, funds have still raked in record billions so far in 2021. The Investment Company Institute’s total figure for the year is $71 billion with three and a half months left. Municipal bond mutual funds added $93.2 billion in 2019, the largest recorded, but this year’s total has eclipsed the next best year, 2009, when $70.4 billion was pumped in, according to CreditSights.

The primary is building for next week, the first full week of the month, led by the $2 billion California deal Tuesday. Bond Buyer’s 30-day visible supply sits at $13.08 billion while Bloomberg data shows net negative supply at $4.143 billion.

The four-week moving average remained positive at $1.456 billion, after being in the green at $1.653 billion in the previous week.

Inflation a growing concern?
Inflation should prove to remain mostly transitory, but a spike is possible, analysts said.

“We are concerned about inflation and we are increasingly worried about supply chains and labor markets,” said Wilmington Trust Chief Investment Officer Tony Roth. While he said the base case is for moderation and temporary inflation, “our non-base case of an inflation spike is increasing.”

The chances of persistent inflation, he said, have risen to as much as 40%. Consumers have money to spend, but supply chain issues have suppressed inventories and the service sector can’t find workers, Roth said.

“If you have months of low inventories, you idle your labor force. But after months of this, the supply chain becomes ossified,” he said. “You cannot easily bring back labor, retrain them, etc.”

However, Roth said, because of wage pressures, the Federal Reserve needs to begin tapering its asset purchases so it will be able to increase rates when needed. He expects tapering by yearend.

Despite the moderation, David Kelly, chief global strategist at JPMorgan Funds, believes inflation will remain about the Fed’s 2% goal through 2023.

While supply chain issues should clear next year and demand will grow slower, Kelly said. “However, a number of factors should conspire to keep inflation more elevated than at the end of the last expansion.”

Rising wages, elevated inflation expectations, a declining dollar and increasing rents are among those factors. JPMorgan Funds sees inflation measured by the consumption at 2.7% year-over-year by the fourth quarter of 2022 and 2.4% on an annual basis in late 2023.

And despite the fact the Federal Open Market Committee will have to increase its inflation projection at their upcoming meeting, in addition to raising unemployment forecasts and cutting growth figures, tapering should still be announced this year, he said.

“Given the recent deterioration in economic data and considerable uncertainty about fiscal matters, the Fed is unlikely to lay out a plan for tapering bond purchases at its September meeting,” Kelly said. “However, we expect that they will do so at their November meeting and will cut bond purchases to zero by July of next year. This should open the door for a 0.25% increase in the federal funds rate in December 2022, followed by four more over the course of 2023.”

BNP Paribas sees inflation continuing to surprise to the upside, with the consumer price index rising 2.5% next year and 2.4% in 2023. And the delta variant will delay recovery, although BNP predicts “above trend growth” through 2023, said Andrew Schneider, U.S. economist at BNP.

They see a December taper announcement, with cutbacks beginning in January, but moved liftoff up to the last quarter of 2022, rather than the first quarter of 2023, based on higher-than-expected inflation.

In data released Thursday, initial jobless claims fell to a pandemic low 310,000 in the week ended Sept. 4 on a seasonally adjusted basis after a revised 345,000 level the week before, first reported as 340,000.

Chip Barnett contributed to this report.