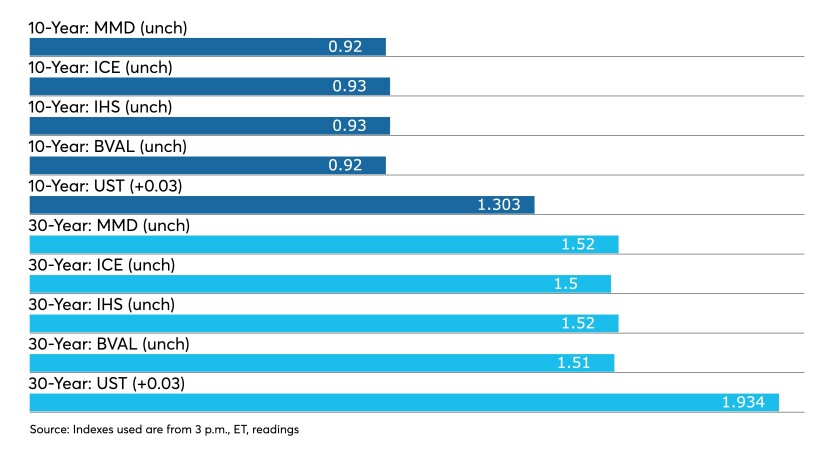 Municipal benchmark yield curves were little changed to a touch firmer Tuesday as all eyes were on the primary in which several larger competitive loans were sold and New York City Transitional Finance Authority offered nearly $1 billion to retail investor for the second day with some concessions.

Daily bid-wanted totals per Bloomberg have fallen to an average par value below $450 million, a steady decline from $640 million per day during the first quarter and $549 million in the second, noted FHN Financial’s Kim Olsan. Bid-wanteds on Monday were $423 million and $219 million on Friday. Trading on Tuesday showed par volume of about $3.6 billion near the close.

“That aspect, combined with fund inflows, has proven to be the linchpin of support and why most spot levels are holding at such low relative value ratios,” she said.

While not much is expected to change with either metric, September’s trading history can be more volatile, she said, and in recent years has brought a weaker tone in the first half of the month.

“Any adjustment to generic yields sets up better buying conditions and the need for focused premarketing of larger issues,” Olsan said.

Recent deals point to smaller oversubscriptions “as investors weigh comparative values across credit sectors and the reward of any particular structure in a low-rate environment,” she said.

Olsan has noticed an increase in inquiry for 3s and 4s in the intermediate range, where the first 1% yield hits in shorter maturities than in 5s and the premium outlay is more moderate.

“The curve slope is likely to start the new month about 10 basis points steeper than where it ended in July — giving some impetus to modest extension on a coupon-neutral basis or lending some incentive toward lower, shorted-dated coupons,” she said.

In late trading, Treasuries were slightly weaker as equities were mixed.

Jobs data eyed
The market is focusing on Friday’s employment report, which could have a big impact on the Federal Reserve’s taper plans.

Economists polled by IFR Markets expect 728,000 jobs to have been added.

It could go either way, said John Farawell, head trader and EVP at Roosevelt & Cross. “Friday’s number could move the Fed to taper sooner than later or follow the present course of patience and data dependence.”

While the prior report showed 943,000 jobs added, that was before the Delta variant started progressing. Farawell expects about 700,000 jobs added. “Watch the reaction of the 10 year and equity markets,” he said, “this may give us a read on the Fed’s intentions.”

With the consensus expecting fewer jobs added in August, Luke Tilley, chief economist at Wilmington Trust, said, “Unless job growth surprises markedly to the upside, we would expect the Fed to remain on track for a taper announcement at the November rather than September meeting.”

While COVID cases appear to be “plateauing,” he said, “it will be important to monitor whether it continues to improve going forward.”

But, Delta took a bite out of consumer confidence, which could also play in the Fed’s taper deliberations.

The index hadn’t been this low since posting a 95.2 read in February.

“There was no shortage of things to worry about, which weighed on consumers’ collective psyche in August,” said Wells Fargo Securities Senior Economist Tim Quinlan and Economic Analyst Sara Cotsakis. “It was the first month showcasing the full extent of the Delta variant on confidence.”

The rise in COVID cases, including among vaccinated people, and “an unwelcome reinstatement of mask mandates and other restrictions … have dashed consumers’ hopes of a swift return to normal — at least in the near term,” they said.

Other factors could be the complicated withdrawal from Afghanistan and continued price gains, Quinlan and Cotsakis said.

On a positive note, they said, “the readings from this measure are not as glum as in the University of Michigan’s index of consumer sentiment, which dipped to its lowest since 2011 in the same month.” And of course, stocks being near record high levels and jobless claims sliding also help consumers.

Additionally, the drop in confidence hasn’t translated into a decline in consumer activity, they note.

But Wilmington Trust’s Tilley said consumer spending in July was disappointing. “Total spending adjusted for inflation posted a slight decline in July, as higher prices took a bite out of consumer spending,” he said.

“With consumer spending starting off the quarter on weak footing, and the Delta variant appearing to hit spending further in August,” Tilley said, “there is downside risk to GDP estimates for 3Q, and the remainder of the year.”

The numbers, he added, support the notion inflation will be transitory “and gives some breathing room to wait on a taper announcement if desired.”

Separately, housing prices continued to rise at record levels, with the S&P CoreLogic Case-Shiller national index up 18.6% in June on an annual basis, after rising 16.8% in the month ended May. The 20-city index was 19.1% higher than a year ago and to 10-city gained 18.5%.

The prices keep climbing “due to the chronic supply and demand mismatch of single-family housing,” said Sam Dunlap, CIO of public strategies at Angel Oak Capital Advisors. “The rise of the millennial and the lack of investment after the global financial crisis combined with the pandemic and all-time low mortgage rates have home prices surging,” he said. “We don’t see this ending anytime soon.”

Also released Tuesday, the Chicago Business Barometer fell to 66.8 in August from 73.4, below the estimated drop to 68.0.