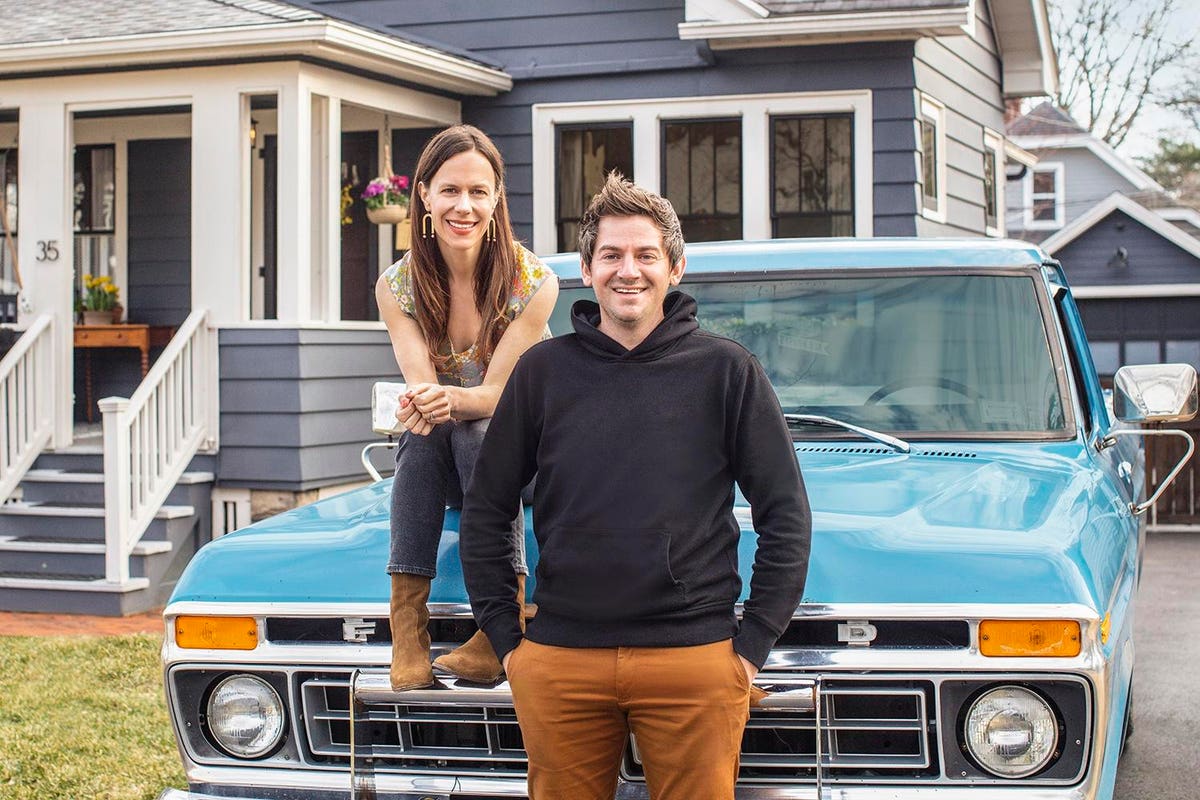 In a sea of fix-and-flip home renovation shows, HGTV’s Cheap Old Houses offers viewers a new spin on real estate inspiration in the form of, well, cheap old houses. Based on Elizabeth and Ethan Finkelstein’s wildly popular Instagram account of the same name, the 10-episode series follows the couple as they traverse the US in their vintage truck, Old Blue, in search of architecturally intact old houses (and sometimes churches and schools!) for under $150,000.

“We love that people think our show is both aspirational but also attainable,” says Ethan, “people can really see themselves buying these homes and feel inspired that you don’t need to go into extreme debt to live in a fantastic house.” In each episode, the couple explores two old houses priced under $150,000 and then chooses which home wins a coveted spot on their Cheap Old Houses feed. From Victorian-era mansions to rural school houses, a classic bungalow to a bygone train depot—the show features architecturally intact structures across the United States that are “full of potential” but in need of work.

In keeping with their brand mission of “saving old houses” in small towns and cities across the US, the show allows viewers to discover real estate gems in unsung corners of the nation’s real estate market. “These aren’t houses that presidents lived in—these are the real homes of every day Americans and they’re disappearing unless people buy them and fix them up,” says Elizabeth. An historical preservationist by profession, Elizabeth was never drawn to the tear-it-down-to-the-studs gut rehab narrative featured on most home renovation shows, noting that “the traditional landscape of home renovation shows was never something we fit into…we’re not interested in perfect.” To the contrary, it is important to the Finkelsteins to celebrate the reality of old houses—both the wow-worthy architectural features and the structural quirks or issues. “The home that has original wood flooring but maybe there’s a hole in the floor, or an unfinished kitchen with all vintage cabinets, those are the homes that I love to feature.”

At the end of each episode, the Finkelsteins do their version of an “After,” in which they catch up with home buyers who have purchased an old home found on their site. According to Ethan, these “Afters” are often works in progress rather than perfectly finished rooms (none of the homes featured in the show are staged). “Done is a word that doesn’t exist in the old house world,” Elizabeth explains, adding that they felt it was important to demystify the process of rehabbing an older home and show that “it’s ok to be a work in progress…old houses are always a work in progress.”

When asked why cheap old houses continue to remain an enticing draw for home buyers, Elizabeth is quick to point out that “it’s never a bad idea to buy something within your means, work with your hands, and create a home that will last.” And when it comes to finding your dream cheap old house, Elizabeth and Ethan firmly believe that “there’s an old house out there for everyone.”

Cheap Old Houses airs Mondays, 9pm /ET on HGTV and is available via streaming on discovery+