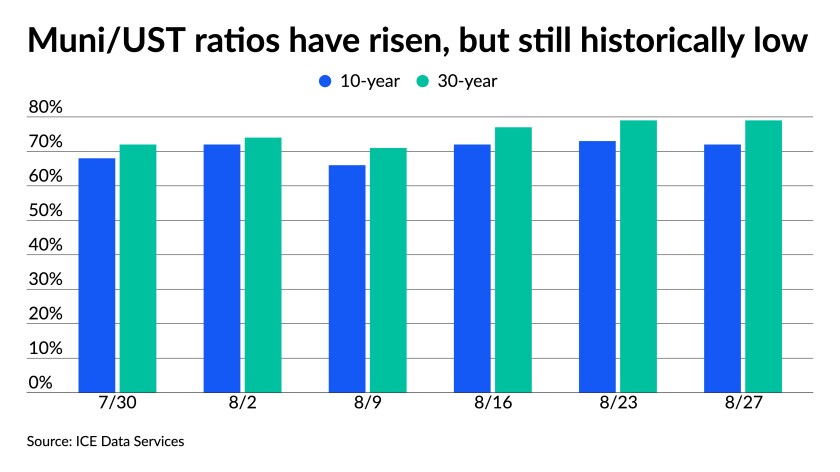 Municipals were little changed in light trading on the last Friday of August as U.S. Treasuries made gains as did equities following Federal reserve Board Chair Jerome Powell’s Jackson Hole speech.

The total potential volume for next week is estimated at $4.938 billion, an expected drop as the unofficial final week of summer comes ahead of Labor Day weekend.

It’s led by $1.2 billion of exempt and taxable New York City Transitional Finance future tax-secured bonds. The TFA also brings the largest competitive loan of the week with its $250 million of taxables.

There are $3.826 billion of negotiated deals scheduled and $1.111 billion of competitive loans.

A few notable deals include a $400 million-plus nonrated senior living from the New Hope Cultural Education Facilities Finance Corp. in Texas and newly upgraded Wisconsin with a $327.4 million of taxable general obligation refunding on Tuesday.

While 30-day visible supply sits at a meager $7 billion, the supply/demand gap should ease some going into September, according to BofA Securities in a weekly municipal report.

New issuance is expected to be $41 billion, BofA says, but principal redemptions are expected to be only about $20 billion and coupon payments about $8 billion, significantly lower than any of the previous three months (August alone was north of $60 billion of cash).

Even with fewer redemptions and more supply, however, “this is unlikely to affect pricing much due to continued strong mutual fund flows and high cash levels in institutional and retail portfolios,” strategists Yingchen Li and Ian Rogow said in the report.

In the next few weeks, BofA expects muni/Treasury ratios to move lower and credit spreads to go tighter “as volatilities should decline and a risk-on atmosphere returns to the macro landscape.”

Although munis have remained quite rich for the past few months, they are still more attractive than Treasuries or corporates, BofA said.

In late trading, Treasuries were better as equities gained.

The main event
Everyone agrees Federal Reserve Board Chair Jerome Powell said the Fed could start tapering this year and that it would have no implications for liftoff, but not everyone was satisfied with what they heard.

“The speech supported the Fed’s assertion that the sharply higher inflation is temporary, and that inflationary expectations remained well anchored to the Fed’s longer-run objective,” noted Berenberg chief economist for the U.S., Americas and Asia Mickey Levy, a member of the Shadow Open Market Committee. “In this regard, parts of the speech seem strained and display an asymmetric assessment of the risks.”

“Markets of course were looking for signals of when the Fed would begin tapering,” he added. “Powell did not provide any indication.”

Powell “gave the general impression that though the Fed has been on the verge of announcing the start of tapering, it won’t take that step until it’s evident that the current COVID outbreak won’t cause a further economic dip,” said Cato Senior Fellow and Director of the Center for Monetary and Financial Alternatives George Selgin. “A rate liftoff remains a still more distant prospect.”

Should consumer prices continue rising “relatively rapidly,” he said. “It may even be compelled to alter some of its policy rate settings, if only by means of ‘technical adjustments’ that leave its official target range unchanged.”

And while other Fed officials, mostly non-voters, were on television professing their desire to cut back on asset purchases, while Powell “may be joining the consensus,” said Interactive Brokers’ Chief Strategist Steve Sosnick, “he sounded less aggressive than his FOMC peers. Most importantly, he does not see the conditions that are necessary for interest rate hikes anytime soon.”

“In what would have been a perfect opportunity for the Fed to provide greater clarity on changes to their asset purchase program, Powell erred on the side of caution,” said Dustin Qualley, senior portfolio manager at Build Asset Management, which focuses on fixed-income and options strategies.

“I would have liked to hear more about how the Fed sees their policies evolving to address the structural changes in the economy where many Americans are still faced with joblessness,” he said.

However, he had an issue with the continuing expectation inflation will be transitory. “They cannot take the spike in inflation to be temporary as granted.”

“He managed to bring forward (albeit by only a month or two) market expectations for the taper timing but, markets still rallied,” Ferridge said. “That, I suspect, would have been his objective ahead of the speech: increase taper expectations (it has been a slow drip process since June) but not cause a taper tantrum. He succeeded on both fronts.”

The key, he said, was stressing taper would have no impact on liftoff and “by talking down inflation risks at the same time that he is arguing for a taper. He laid out the case for current inflation pressures being transitory and also argued that there was little sign of wages gains that were necessary to fuel ongoing inflation. So, he managed to announce a (slightly) more hawkish policy shift, while at the same time laying out why he is likely to remain a medium/long-term dove. A job well done.”

In the speech, Powell said, “Long-term unemployment remains elevated, and the recovery in labor force participation has lagged well behind the rest of the labor market, as it has in past recoveries.” But, the factors keeping people from looking for a “are likely fading,” although “the Delta variant presents a near-term risk, the prospects are good for continued progress toward maximum employment.”

The inflationary pressures seen by businesses and consumers, he said, is “a cause for concern,” but the high levels should “prove temporary” and his “baseline outlook is for continued progress toward maximum employment, with inflation returning to levels consistent with our goal of inflation averaging 2% over time.”

Data should support his belief “some of the supply-demand imbalances are improving, and [offer] more evidence of a continued moderation in inflation, particularly in goods and services prices that have been most affected by the pandemic.”

Policy, he said, “is well positioned,” although the Fed is prepared if adjustments are needed.

Powell said inflation has met the “substantial further progress” level, and while “clear progress” was made in employment “we have much ground to cover to reach maximum employment.”

At the July FOMC meeting, he said, most of the officials, including him, thought “if the economy evolved broadly as anticipated, it could be appropriate to start reducing the pace of asset purchases this year.” Since then, there’s been “more progress in the form of a strong employment report for July, but also the further spread of the Delta variant.”

The taper “will not be intended to carry a direct signal regarding the timing of interest rate liftoff, for which we have articulated a different and substantially more stringent test,” Powell said. “We have said that we will continue to hold the target range for the federal funds rate at its current level until the economy reaches conditions consistent with maximum employment, and inflation has reached 2% and is on track to moderately exceed 2% for some time. We have much ground to cover to reach maximum employment, and time will tell whether we have reached 2% inflation on a sustainable basis.”

Economists polled by IFR Markets expected income up 0.2% and spending 0.3% higher, the core PCE price index to be up 0.3% for the month and 3.6% for the year.

PCE numbers he said have been “dramatically higher than earlier forecasts” and with low numbers posted in the last five months of 2020, expect more increases in the months ahead, he said.

While spending rose in the month, “inflation grew even faster,” said Wells Fargo Securities Senior Economist Tim Quinlan and Economist Shannon Seery. “The good news is that with income up 1.1% on the month, consumers could bankroll more spending; the bad news is that they are disinclined to do so.”

Whether or not inflation proves to be transitory, they said, “if inflation continues to outpace spending growth, it will become increasingly difficult for the Fed to favor its employment mandate if it means the consumer’s purchasing power is being eaten away by higher prices.”

Also released Friday, the University of Michigan consumer sentiment index closed August at 70.3, up a tick from the mid-month read, but down from July’s 81.2.

The TFA is also set to sell $250 million of taxable future tax-secured bonds at 10:45 a.m. Eastern on Wednesday.

The South Carolina Association of Governments is set to sell $147.202 million of certificates of participation (MIG-1) at 11 a.m.