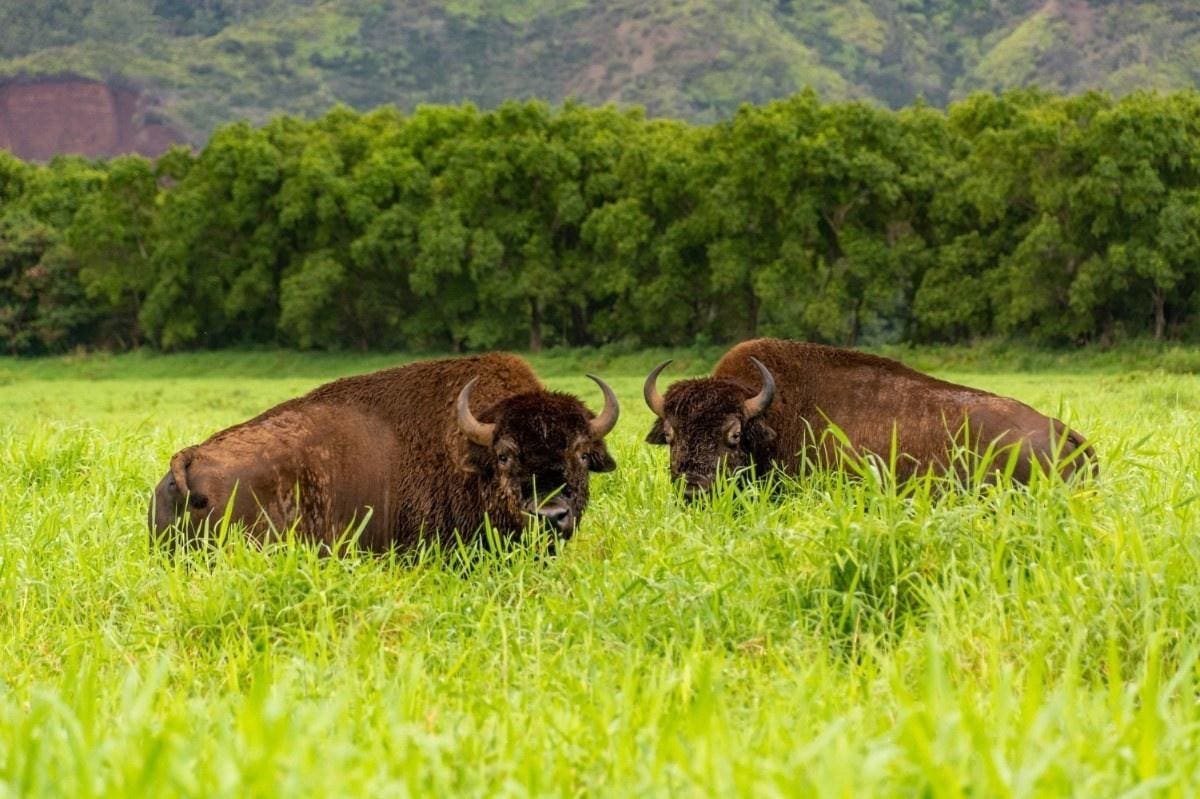 If miles of green grass dotted with grazing bison are your idea of paradise, this property in the heart of Kauai’s North Shore is for you.

Called the Hanalei Bison Ranch, the 228-acre fruit farm, bison ranch and tilapia fishery is the largest property on the coveted North Shore. It’s now for sale at $32 million, according to the listing provided by Hawaii Life top producer Neal Norman.

Ranch living isn’t the property’s only attribute. Set high on a bluff overlooking Hanalei Valley, the bison ranch takes in sweeping views of the mountains and ocean. Three residences lie on the higher elevation and take in west-facing views of the ocean and sunset. The trio of living structures combines to offer nine bedrooms, seven bathrooms and nearly 7,000 square feet of living space.

Outbuildings and infrastructure include two barns and four wells. The Hanalei River borders a portion of the property’s lower basin. This American heritage river starts on the slopes of Mount Waialeale and extends about 16 miles before emptying into Hanalei Bay.

Hanalei Bay and River properties are coveted for their lifestyle attributes, including world-class canoeing, stand-up paddling, kayaking, boating, and fishing. Close access to Princeville’s shopping, dining and leisure sports are another perk.

The Hanalei Bison Ranch is the latest trophy offering to surface for sale on the North Shore. Earlier this year, the personal Hanalei residence of late Pahio Resorts developer and philanthropist Dave Walters hit the market for $15 million. Measuring over 11,000 square feet and featuring views of the landmark Kilauea Lighthouse, the 2.75-acre estate is considered the largest luxury home for sale on Kauai.

Also in the mix is a 34-acre offering on the North Shore’s so-called “Secret Beach.” Located on Kauapea Road, the bluff-front offering is prime for development and is divided into two five-acre parcels and a 24-acre parcel. The coveted offering, listed for $50 million, is scheduled to hit the auction block with no reserve in September.

Intense demand for Kauai real estate continues to drive a market that has been red-hot since the onset of the COVID-19 pandemic. From Q2 2020 to Q2 2021, Kauai has seen a more than 300% increase in island-wide residential sales volume, increasing from $114 million to $458 million year-over-year, according to Hawaii Life.

On the North Shore, which is considered Kauai’s most coveted area, sales volume increased 346% over the same period. In the high-end sector, the area has seen 11 sales of $10 million or more since July, five of which sold for over $20 million. Norman, long one of Hawaii’s top-producing luxury agents, himself has accounted for more than $222 million in sales volume since the start of 2021.

Hawaii Life is a founding member of Forbes Global Properties, a consumer marketplace and membership network of elite brokerages selling the world’s most luxurious homes.