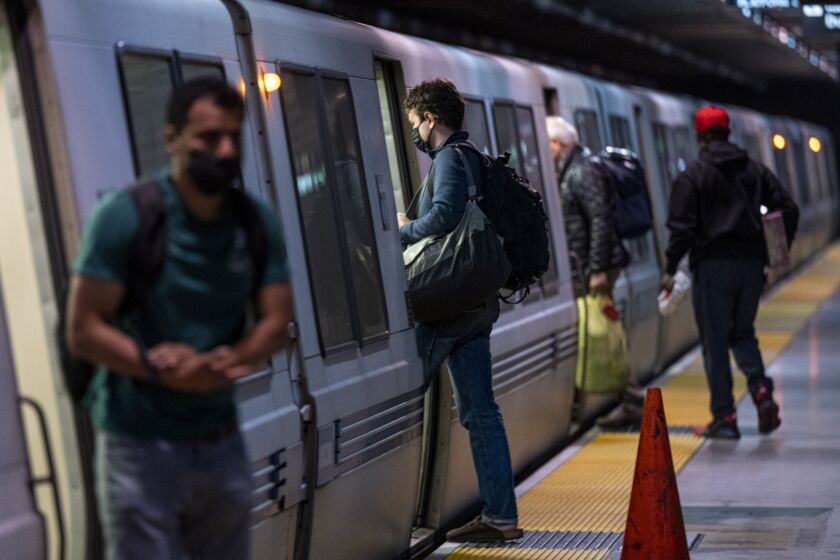 The rating agency also maintained its negative outlook at the lower rating. Fitch’s action Thursday affects BART’s issuer default rating and $686 million in taxable sales tax revenue bonds. The agency had just shy of $2 billion of long-term debt outstanding at the close of fiscal 2020, according to its annual financial report.

The 49-year-old heavy-rail transit system connects the San Francisco Peninsula with communities in the East Bay and South Bay.

Before the pandemic, its core ridership was people coming to work in downtown San Francisco on weekdays. That pattern has yet to recover.

“The downgrade reflects Fitch’s expectations for an incomplete revenue recovery after the pandemic and the execution risks BART will face as it adapts to fundamental changes in commuter behavior and transit demand over the next several years,” Fitch analysts wrote. “The Negative Rating Outlook reflects uncertainty surrounding future ridership and BART’s ability to close resulting out-year budget gaps.”

BART carried more than 400,000 people on a typical weekday before the COVID-19 pandemic. In July and August, weekday ridership has been a bit over 20% of that level, according to ridership data the district posts on its website. Friday, Aug. 20, marked the highest pandemic ridership at 102,530, 25% of the pre-pandemic baseline.

Although the pandemic hit ridership hard, BART has been proactive in maintaining service for essential workers throughout the pandemic and, more recently, restoring service to support the Bay Area’s recovery, said Pamela Herhold, BART’s assistant general manager for performance and budget.

Herhold notes that Fitch would rate the revenue bonds higher but caps them at BART’s issuer default rating. That reflects “both solid growth prospects for pledged revenues and very strong financial resilience of the structure,” according to the rating agency.

The sales tax revenue bonds are payable from a first lien on 75% of the half-cent BART sales and use tax.

“BART, which has traditionally relied heavily on fares to support its operations, will need additional revenues that would require outside approval or budget reductions on a scale that may be impractical in order to restore its historically strong underlying operating margins after the expiration of federal stimulus measures,” Fitch analysts wrote.

The AA underlying rating reflects the system’s gap closing capacity, low long-term liabilities and manageable capital spending pressures in the context of an unusually broad and deep economic resource base.

Fitch analysts said they expect BART to continue to play a key role in connecting the region’s workers to employment centers and in meeting the region’s environmental and congestion management goals, but the transit district is likely to face fundamental changes in commute patterns as remote work persists after the pandemic.

“The region is home to the world’s largest information technology industry cluster, which has driven extraordinary wealth creation and sustained population growth for many years,” Fitch analysts wrote.

The district is expected to experience an extended period of revenue weakness due to reduced ridership, Fitch said.

The BART district incorporates the counties of San Francisco, Alameda and Contra Costa, and the system also operates in San Mateo and Santa Clara counties.

The system operates 50 stations on its 131-mile network.

Should You Hide Out in Wal-Mart’s Stock?
HMRC admits errors in responses to FoI requests over ministerial probes
Demand For Cold Plunge Pools Heats Up
Fed can shrink reserves by $2 trillion without missing a beat: Waller
In The Famous Bird Streets Of Los Angeles, An Architectural Gem Hits The Market For $13.7 Million