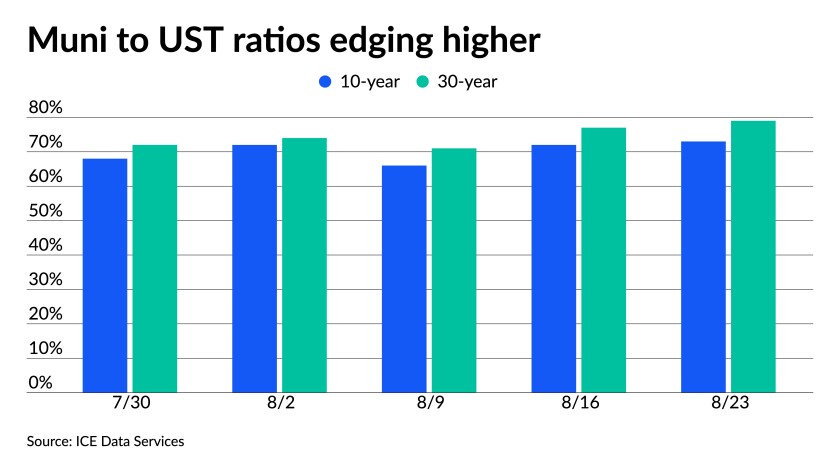 Municipals were unmoved in light trading to start the last week of August while U.S. Treasuries maintained Friday’s levels and equities advanced on news the FDA gave the Pfizer COVID-19 vaccine full approval.

Municipal benchmark yield curves continued to hold steady for the seventh day as investors await a diverse primary that includes gilt-edged Montgomery County, Maryland, and low-rated Illinois in the competitive market and large transportation, airport, healthcare and housing credits in the negotiated space.

U.S. Treasuries gave little direction Monday while municipal-to-UST ratios held steady but have edged higher in August, leading some participants to argue yields and ratios are satisfactory to ride out the summer.

Returns are still in the negative on the month for high-grades and high-yield, according to Bloomberg Barclays Indices, with the Municipal Bond Index at -0.29% for the month, +1.60% for 2021; the High-Yield Index has lost 0.09%, but is up 7.31% this year. Taxable munis have turned it around to positive 0.16% for August and 2.12% for the year after being in the red earlier in the month.

September issuance typically falls below August totals. But September’s dynamic looks a little different than the June-August period, as expected redemptions reach about $25 billion, or less than half that of August, noted Kim Olsan, senior vice president at FHN Financial.

Given that COVID-related federal relief dollars continue to roll in with the three largest municipal issuers — California, Texas and New York — to be allocated about $92 billion, “or about 3 months’ worth of national supply,” it could limit some issuers’ needs for more paper, she noted.

Net negative supply is $2.124 billion for California, $7.25 billion for Texas and $227 million for New York, per Bloomberg data.

Among those states whose budgets were more strained pre-COVID — Illinois, New Jersey and Pennsylvania — the federal monies total an estimated $36 billion. Net negative supply for New Jersey is $894 million and Pennsylvania is at $224 million while Illinois supply is $173 million in the positive. The federal monies “are certain to detract from financing needs related to debt refinancing or new-money efforts,” Olsan noted.

“Either way, a better matchup between money cycling in and out gives bidders potential flexibility in levels heading into the new month,” Olsan said.

Delta and Jackson Hole
As the Delta variant lifts the number of COVID cases and deaths, uncertainty grows as the economic impact likely rises.

“There may be strong resistance to more lockdowns but the numbers will no doubt take their toll on the economic recovery one way or another,” said Craig Erlam, senior market analyst, UK & EMEA, at OANDA. “The data in recent months has been fantastic but the outlook is becoming increasingly downbeat.”

And with questions about the outlook, could impact the Federal Reserve. “What was looking a fairly straight forward move now brings significant doubts,” Erlam said. “Jackson Hole looked the ideal platform for a taper warning but now, officials may be more inclined to see how the data unfolds over the weeks before the September meeting before dropping any major hints.”

Since Jerome “Powell has been very careful” about taper talk, “I would expect Friday’s speech to be another small step in that direction,” said Gary Pzegeo, head of fixed income at CIBC Private Wealth.

“We’ve heard a number of Fed governors and regional bank presidents favor a reduction in the Fed’s asset purchases beginning before the end of the year, but I don’t expect we’ll get an announcement on the start of tapering by Powell on Friday,” he added. “As with prior FOMC meetings, the latest Fed minutes show a difference in opinion on the timing of tapering among the Committee members.”

Besides the Fed’s stated concern about the Delta variant at its last meeting, Dallas President Rob Kaplan last week said if the rise hits consumer spending, he “could change his mind on tapering.”

While Powell will continue to state the Fed will move to taper if the economy goes as planned, “it seems the Fed would like to see more data before committing to a timeline,” Pzegeo said.

But, it remains unclear how the Delta variant will impact the economy. “High-frequency measures on seated diners and the number of people through TSA checkpoints suggest service activity has plateaued but not materially deteriorated,” Wells Fargo Securities said in a note. “The sideways move in activity, in conjunction with weaker-than-expected retail sales in July, suggests some downside risk to our personal spending estimates for the third quarter.”

And while worker shortages and supply chain issues appeared to ease in July, they said, “the latest surge in COVID cases puts the timeline of further improvement at risk.”

As for data released Monday, existing home sales jumped 2.0% in July to a seasonally adjusted annual rate of 5.99 million from a downwardly revised 5.78 million in June, first reported as 5.86 million.

The number of first-time homebuyers also slipped in the month.

“The housing market appears to be moving back toward some semblance of balance this summer,” said Mark Vitner, senior economist at Wells Fargo Securities. High prices have led to more supply, which has “moderated ever so slightly, taking price gains down a notch from the mesosphere to the stratosphere.”

The Diffusion Index, also a three-month moving average, rose to positive 0.28 in July from positive 0.05 in June

The numbers suggest the economy is growing at an above average pace. “An increasing likelihood of a period of sustained increasing inflation has historically been associated with values of the CFNAI-MA3 above positive 0.70 more than two years into an economic expansion,” the Fed said.