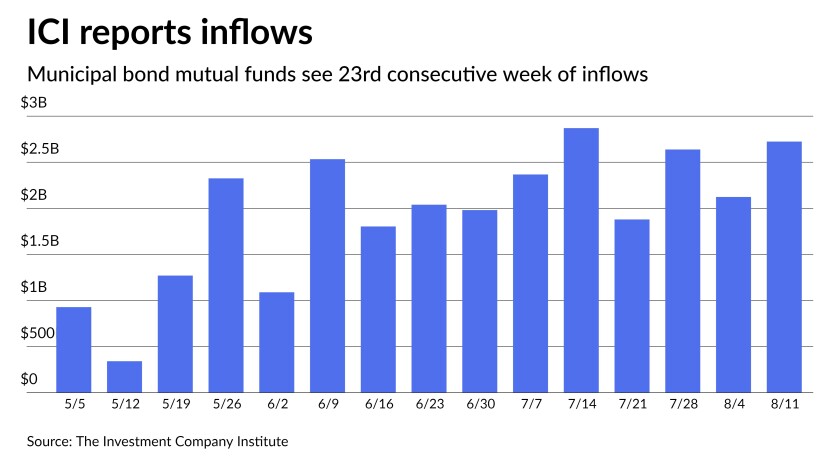 Investors digested three mammoth deals of $1 billion or more in the primary market on a heavy day of issuance as municipals remained unchanged, Treasuries were mostly steady, and more than $2.5 billion flowed into long-term municipal bonds.

The primary market activity was brisk Tuesday as all eyes turned to the Federal Open Market Committee’s July minutes for sentiment over a possible spike in inflation and answers to the debate over the end of the pandemic-era emergency programs.

For a third day in a row this week, the benchmark triple-A general obligation bonds were unchanged from 2022 to 2051, according to Refinitiv Municipal Market Data.

“The lack of bid wanteds isn’t creating any weakness or strength,” a Florida trader said, noting that the Treasury auction of $27 billion of 20-year bonds at a yield of 1.85% was just one reason for the pressure on the short end.

“The Fed minutes are just another reason for the lack of secondary participation,” the trader said. “You have what feels like decent money in investors’ hands, but also a lot of patience due to the fear of inflation and rising rates,” he added.

The minutes from the central bank’s meeting revealed that Federal Reserve officials felt the employment benchmark for decreasing support for the economy “could be reached this year,” but had not yet been satisfied.

“Most participants anticipated that the economy would continue to make progress toward those goals,” the minutes said.

With Treasuries off a touch and a glut of billion-dollar deals pricing in the primary market, the short end traded sideways on Tuesday, he said.

The presence of billion-dollar deals from New York City, the New York Liberty Development Corporation, and Miami-Dade County, he said, were mostly to blame for the lethargy.

“The activity remains light in here,” the trader explained of the secondary market.

It is a “challenge” sourcing demand inside of five years, while demand is “extremely spotty” between 11 and 15 years, he noted.

“Although there is a little uptick seven years and longer, there is nothing to create opportunity, despite a decent supply today and [improving] ratios.”

The deal was priced for institutions after a two-day retail order period where more than $300 million was spoken for by individual mom and pop investors, according to traders.

The New York Liberty Development Corp. was set to price $1.225 billion after a one-day retail order period on Tuesday, although the pricing scale was not available by the close of trading.

Miami-Dade County came to market with the largest sale in PortMiami’s history with $1.24 billion of seaport revenue bonds.

New deals
In addition, the Puerto Rico Aqueduct and Sewer Authority made an unexpected appearance this week, refunding all of PRASA’s 2012 Series A and B senior lien bonds, marking the second time since December 2020 that PRASA has accessed the capital markets to pursue substantial reductions in annual debt service, according to a joint press release from the Puerto Rico Fiscal Agency and Financial Advisory Authority and the Puerto Rico Aqueduct and Sewer Authority. The refinancing, which priced Tuesday and was executed through a series of transactions including an exchange, a tender for cash, a current taxable refunding and a forward delivery refunding, will generate approximately $570 million in debt service savings over the life of the refunding bonds, according to the release.

The day’s other deals saw similar strong demand for bonds inside 10-years, where retail investors are flocking lately, the Florida trader said.

It marked the 23rd week in a row the funds saw inflows. In the previous week, muni funds saw an inflow of $2.228 billion, ICI said.

ICI said the total combined estimated inflows from all long-term mutual funds and ETFs were $19.906 billion after inflows of $16.341 billion in the previous week.

Tapering debate
With the price stability goal met, and maximum employment “close to being satisfied,” Federal Open Market Committee members said it could be appropriate to reduce its asset purchases later this year, according to minutes of its latest meeting.

“Most participants noted that, provided that the economy were to evolve broadly as they anticipated, they judged that it could be appropriate to start reducing the pace of asset purchases this year because they saw the Committee’s ‘substantial further progress’ criterion as satisfied with respect to the price-stability goal and as close to being satisfied with respect to the maximum-employment goal,” the minutes of the July 27-28 meeting said.

Some said conditions could support tapering “in coming months,” while others believe it “was more likely to become appropriate early next year because they saw prevailing conditions in the labor market as not being close to meeting the Committee’s ‘substantial further progress’ standard or because of uncertainty about the degree of progress toward the price-stability goal.”

The discussion also suggested the panel believes Treasuries and mortgage-backed purchases should be done proportionally, as Federal Reserve Board Chair Jerome Powell suggested in his post-meeting press conference that the FOMC did not want to cut MBS purchases quicker than Treasuries as some had suggested.

The minutes seem at odds with Powell’s statement that the employment goal is “a ways away.” Despite a strong employment report, which showed nonfarm payrolls up 943,000 and the jobless rate down to 5.4%, analysts believe it will take at least one more strong report to give the Fed confidence to begin taper warnings.

Indeed, Federal Reserve Bank of Boston President Eric Rosengren said earlier this month that he’d be ready to support tapering if the next report is strong, although he’s not a voter this year, while others have said they’d like to see more solid reports and still some have said they’ve seen enough and are willing to back a reduction in asset purchases.

“The Fed remains in wait-and-see mode as the Delta variant may temporarily delay the full reopening of the economy and restrain hiring and labor supply,” said Ed Moya, senior market analyst for the Americas at OANDA. “The Fed isn’t any closer to formally announcing the reduction of their extraordinary support. Fed tapering is clearly in training camp mode, with Jackson Hole likely being a preseason game, and either the September or most likely the November FOMC meeting being the time to announce how they will pullback stimulus.”

“The minutes only emphasized the central bankers’ uncertainty about the path of the economy and monetary policy heading into 2022,” said Matt Weller, global head of market research at StoneX’s retail division, Forex.com. “Reading between the lines though, the majority of U.S. central bankers appear to be comfortable starting to reduce QE this year as long as there are no major downside shocks to the economy.”

The next FOMC meeting is Sept. 21-22. Next week is the Kansas City Fed’s Jackson Hole summit. The markets will closely watch Powell’s keynote from there.

In the economy in general, supply chain and labor issues as well as the increasing cost of materials continue to challenge the housing market, analysts said.

But, she sees, supply chain problems clearing later this year, and high-end supply will increase, leaving first-time homebuyers shut out.

As home prices continue to rise and building softens, rents will soar, according to National Association of Realtors Chief Economist Lawrence Yun. “There was a housing shortage before the pandemic, and the shortage has been exacerbated during the pandemic,” he said.

Rent payments are included in the calculation of GDP.

Despite supply shortages and other issues, “the industry is on a pace to begin construction on close to 1.6 million homes this year, which would be the best year for housing starts since 2006,” said Mark Vitner, senior economist at Wells Fargo Securities.

Buyer traffic is down, he said, because of affordability and the sparse number of homes available.

In late trading, Treasuries were little changed as equities were mixed.