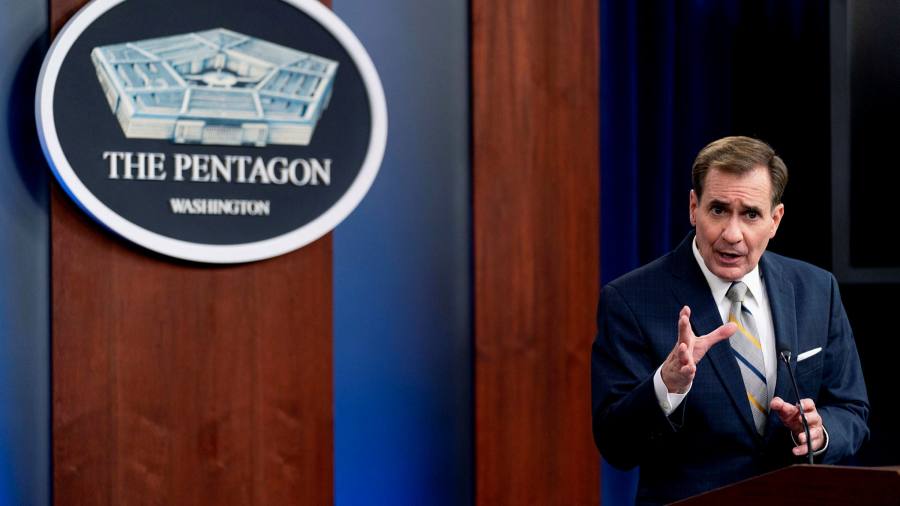 The US and UK will deploy troops to help evacuate staff from their embassies in Kabul as the Taliban continues its lightning rout of provincial capitals in Afghanistan following president Joe Biden’s decision to withdraw American troops.

The Pentagon said it was sending 3,000 troops to Kabul in the next 24-48 hours to help with the embassy drawdown, including aircraft that could help fly personnel out of the Afghan capital, and a back-up brigade of 3,500 soldiers to Kuwait in case the security situation deteriorates further.

The State Department said it was pulling diplomats out because of the threat posed by the advance of the Taliban, adding that only a small number of personnel would be left after the operation was completed.

“We are further reducing our footprint in Kabul in light of the evolving security situation,” Ned Price, state department spokesperson, told reporters on Thursday. “We expect to draw down to a core diplomatic presence in Afghanistan in the coming weeks.”

The UK deployment, also announced on Thursday, will include 600 troops for speeding up evacuations of some diplomatic personnel and Afghans who worked with British forces. Ben Wallace, UK defence secretary, said Britain’s embassy, which is currently on the outskirts of Kabul’s green zone, would also be moved to a safer location.

John Kirby, the Pentagon press secretary, insisted the deployment was not a combat operation, though troops would be armed to defend themselves. Instead, the US and UK said the extra troops would focus on securing staff and evacuating Afghan civilians who supported their missions who are eligible for relocation.

“This is about preparation, we want to make sure that we’ve got enough on hand to adapt,” Kirby said.

Price said the reduction stopped short of a full evacuation and the US embassy remained open in its current location, describing it as “prudent contingency planning”. He said the US was co-ordinating with allies and would begin implementing the measures “soon”.

The first tranche of the 600 UK troops is expected to be in Afghanistan by the end of the week. Sir Laurie Bristow, Britain’s ambassador, will remain in Afghanistan but with a reduced diplomatic team focused on providing visa services to those needing to leave the country.

The decision by the allies underlines the threat to the Afghan capital posed by a number of victories by the Taliban, which on Thursday captured Herat, Afghanistan’s third-largest city, and appeared on the verge of taking Kandahar, the country’s second-biggest city.

The capture of Herat, which is in the country’s west near its border with Iran, takes the total of provincial capitals controlled by the Islamists to 11. That includes the city of Ghazni, which is strategically located on the highway from western Afghanistan to Kabul.

A US defence official told the FT the Taliban could threaten Kabul sooner than expected. The US embassy in Kabul on Thursday put out its second warning in six days urging American citizens to leave “immediately using available commercial flight options”.

Bill Roggio, editor of the Foundation for Defense of Democracies’ Long War Journal who maintains a well-regarded map logging rapid Taliban gains, said when residents and foreign workers in the capital realised an evacuation was under way, the civilian international airport in central Kabul would be “mobbed”.

“If things keep going this way, they’re risking a Saigon moment,” he said.

The UK troops, drawn from 16 Air Assault Brigade and Joint Force Headquarters, will be in Afghanistan for what the ministry of defence called a “short-term” deployment. They include military medics, logistics staff, air movement personnel and protection forces.

One Whitehall official told the FT that fewer than 5,000 evacuees were expected, comprising diplomatic personnel, UK nationals such as contractors, and Afghan interpreters and staff who are eligible for resettlement in Britain under the government’s expanded Afghan relocation and assistance policy.

So far the policy, which was launched in April, has resettled more than 3,100 former Afghan staff and their families in Britain.

The US brigade that is headed to Kuwait will come from the Fort Bragg, North Carolina-based 82nd Airborne Division. Kirby would not disclose which battalions were being sent to Kabul, though he said they were already in the region. They would be based at the civilian international airport.

Another 1,000 US troops were being deployed to Qatar to help with the processing of visas for translators and other Afghan personnel who have worked with US troops.