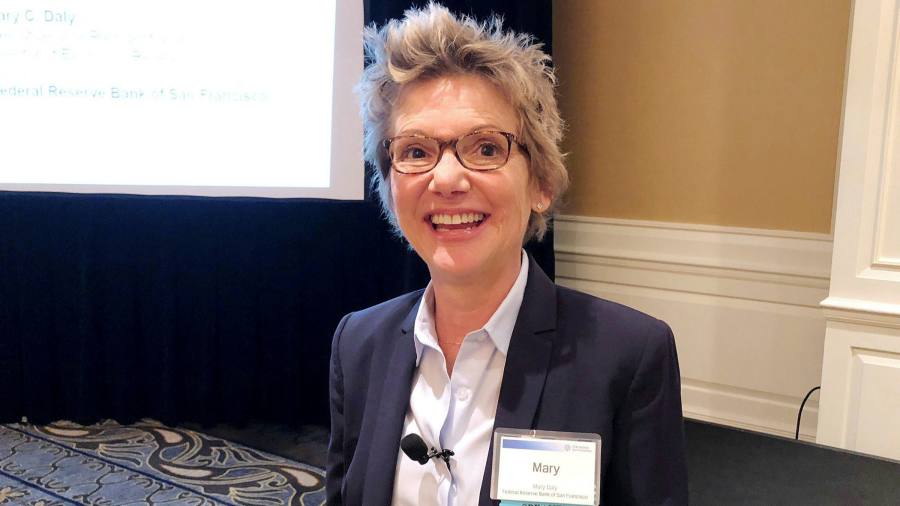 The Federal Reserve could start dialling back its ultra-accommodative monetary stimulus by the end of the year, given the strength of the economic rebound, according to a top official at the US central bank.

In an interview with the Financial Times, Mary Daly, president of the San Francisco Fed, expressed confidence that the robust recovery in household and business activity from the depths of the Covid-19 collapse would continue to gather momentum as more people returned to the workforce and consumer spending remained buoyant, setting the stage for a policy pivot in the coming months.

“I remain very optimistic and positive about the fall and ongoing improvements in the key variables we care about,” she said on Wednesday. “That for me means it’s appropriate to start discussing dialling back the level of accommodation that we’re giving the economy on a regular basis, and the starting point for that is of course asset purchases.

“Talking about potentially tapering those later this year or early next year is where I’m at,” said Daly, who has long been one of the more “dovish” members of the Fed advocating for a patient approach to withdrawing support.

The Fed has said it would continue buying $120bn of agency mortgage-backed securities and Treasuries each month until it achieved “substantial further progress” on its goals of 2 per cent inflation on average and maximum employment.

Daly, who is a voting member on the policy-setting Federal Open Market Committee, said that those thresholds would likely be met by the end of the year or early on in 2022.

Her comments followed another elevated inflation reading on Wednesday, which showed year-on-year price gains were holding steady at 5.4 per cent, even though the increase from last month registered a more moderate pace. Some sectors more sensitive to pandemic disruptions saw slower price rises than in previous months, too.

The labour market has also made significant strides, with 943,000 jobs added in July. The unemployment rate ticked down to 5.4 per cent from 5.9 per cent in June.

“We’re really adding enough jobs to see that we’re making progress towards our full employment goal,” said Daly. “We’re not there yet . . . [but] we’re chipping away at the hole that was dug by Covid.”

Nearly 6m more Americans remain out of work than in February 2020. Daly said she expected the shortfall would shrinks as pandemic fears faded, childcare issues were resolved and enhanced unemployment benefits were phased out.

The improving economic backdrop has catalysed a vigorous debate among Fed officials about the appropriate pace to remove its support. The past week has marked a turning point, with a growing number of central bankers making the case for a swifter retreat from financial markets than many initially expected.

On Wednesday, Esther George, president of the Kansas City Fed and who will be a voting member of the committee in 2022, said it was time to “transition from extraordinary monetary policy accommodation to more neutral settings”.

“While recognising that special factors account for much of the current spike in inflation, the expectation of continued strong demand, a recovering labour market and firm inflation expectations are consistent, in my view, with the committee’s guidance regarding substantial further progress toward its objectives,” George said at a seminar organised by the National Association for Business Economics. “I support bringing asset purchases to an end under these conditions.”

Her views align closely with those of James Bullard, president of the St Louis Fed, and Robert Kaplan of the Dallas Fed, who said in an interview with CNBC on Wednesday that he supported announcing in September that tapering would begin in October. That is also in line with the timeline put forward by Fed governor Christopher Waller earlier this month, so long as upcoming jobs data remain solid.

Raphael Bostic from the Atlanta Fed, Eric Rosengren of the Boston Fed and Thomas Barkin, Richmond Fed president, also weighed in this week, each making the case that inflation was already where it needed to be in order to begin winding down bond purchases.

The principal risk to the outlook, according to Fed officials, is the alarming spread of the more contagious Delta coronavirus variant — although Daly said it was likely to have a limited economic impact.

“Overall, I don’t think it will derail our recovery,” she said.

Biden administration rolls out a blueprint for a ‘renters bill of rights’ – Here’s what it includes
Munis steady, UST yields rise after GDP report
These common misconceptions can prevent you from achieving that perfect credit score
92% of millennial homebuyers say inflation has impacted their purchase plans, but most are plowing ahead anyway, study shows
HMRC admits errors in responses to FoI requests over ministerial probes