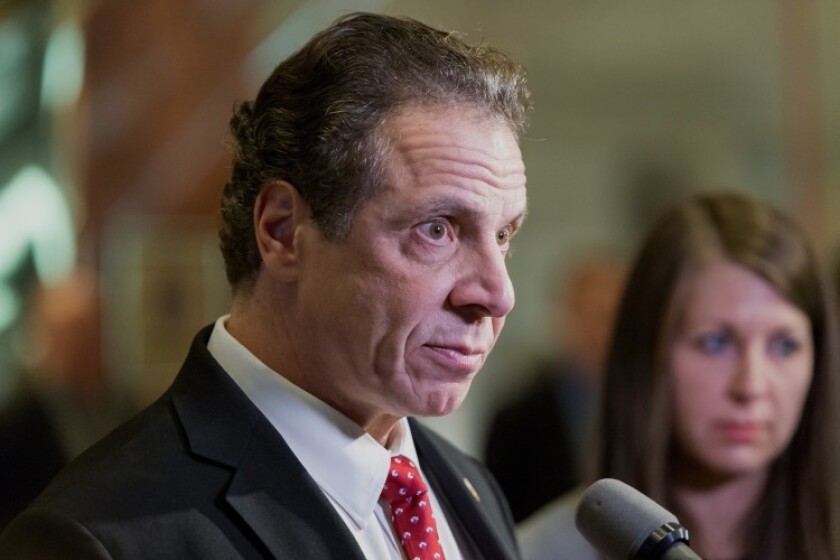 New York Gov. Andrew Cuomo resigned Tuesday in the middle of a sexual harassment accusations and a looming impeachment proceeding by state lawmakers.

Cuomo, 63, a Democrat in his third term, will step down in two weeks, he said in a televised announcement. He said Lt. Gov. Kathy Hochul, 62, will take office then. Hochul, who last week called Cuomo’s actions “repulsive,” will become New York’s first female governor.

“The best way I can help now is if I step aside and let government get back to governing,” the governor said.

“There are provisions for an orderly transition to Lt. Gov. Hochul, who is experienced,” Cure said Tuesday. “The budget is in place until March 31, 2022 ,which also includes a significant inflow of cash from the federal government.

“There is also experience in the Assembly and the Senate,” Cure added. “The state’s administrative arm handling the Coronavirus should continue to address the current situation and, any new developments.”

The governor, in addition to leading the state government, has broad appointment powers that shape the direction of major bond-issuing entities, particularly the Metropolitan Transportation Authority, the Port Authority of New York and New Jersey, and the Dormitory Authority of the State of New York.

Support for Cuomo — the son of former Gov. Mario Cuomo — waned and on Sunday, his top assistant, secretary to the governor Melissa DeRosa, quit under what she called intense emotional pressure.

Early in the COVID-19 pandemic, Cuomo earned national acclaim for his leadership. But he came under sharp criticism over his directive to send coronavirus-infected patients to nursing homes and then covering up a spiraling death count. Reports also said he used state resources to publish his book about the pandemic.

Cuomo’s resignation comes amid turmoil at the state-run MTAO, one of the largest municipal issuers with roughly $50 billion in debt.

Cuomo has sought to change the MTA’s management structure, although Albany lawmakers have resisted.

Congestion pricing for Manhattan and other projects such as the subway extension to LaGuardia Airport will need attention.

“Some of the emphasis on these issues may change, to be replaced by other priorities, under a new governor,” Cure said.