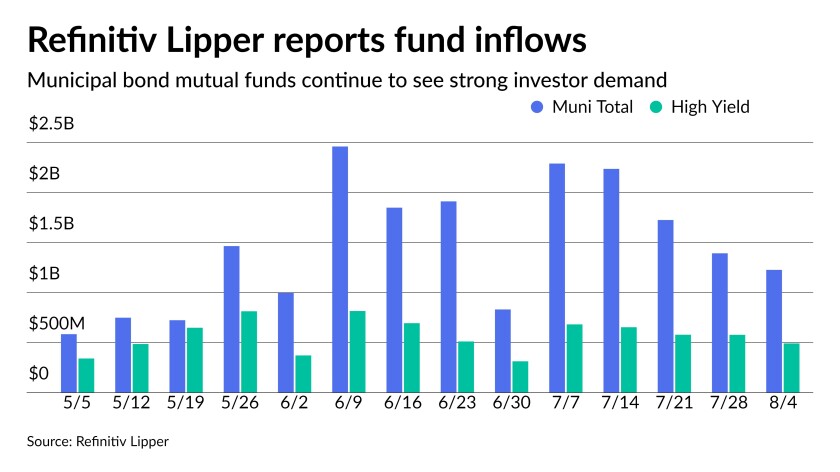 Municipals were mostly steady, ignoring other markets Thursday as the week’s last sizable new issues closed books while U.S. Treasuries rose and equities were up on better economic data.

For the 22nd consecutive week, Refinitiv Lipper reported inflows into municipal bond mutual funds as investors poured $1.2 billion of cash into the funds, with high-yield seeing $492 million of that amount. It marks 9 weeks of more than $1 billion since May 19.

In the week ended Aug. 4, weekly reporting tax-exempt mutual funds saw $1.228 billion of inflows, according to Refinitiv Lipper. It followed an inflow of $1.394 billion in the previous week.

The four-week moving average remained positive at $1.647 billion, after being in the green at $1.913 billion in the previous week.

“Short maturities have caught a bid but there is almost no room left to move further,” said Kim Olsan, senior vice president at FHN Financial.

Similar flows are occurring in new-issue where commitments past the money market range are holding rates to such extreme lows, she said.

“The result may be a function of limited money-market product as note sales this year so far have totaled just $16.8 billion vs. $26.5 billion in the same period last year (issuers have more reserve balances to draw on),” Olsan said. “Tax-exempt money funds have reached a 10-year low of just $91.6 billion. These flows have caused the long end of the curve to cede some volume to maturities inside 7 years, where nearly one-third of trades have occurred in the last week.”

“Based on the real rate range, there is still value in an extension trade, especially where the first 1% yield hits and just past 20 years where about 90% of the full yield capture can be found,” she said.

Olsan pointed to the summer of 2014, when short rates traded below 0.20% but the curve slope was 300 basis points — “much more rewarding in absolute yield terms.”

More NYC paper on the way — NYC to sell $1.3B GOs
New York City said it will issue $1.3 billion of general obligation bonds the week of Aug. 16.

The city will competitively sell $250 million of taxables on Aug. 23.

Proceeds of the bond sale will be used to fund capital projects and convert certain issues of floating-rate debt to fixed-rate debt.

Economy
Jobless claims fell for the second week in a row but are still hovering around the same mark they have been at for months, as the Delta variant is not a contributing factor to a “measurable reduction” in activity, according to one analyst.

“While the Delta variant has sparked a rise in COVID cases, there’s scant indication this is translating to a measurable reduction in economic activity in the U.S. so far, suggesting little meaningful impact on employment,” according to Mark Hamrick, senior economic analyst at Bankrate.

Economists polled by IFR Markets estimated 380,000 claims in the week.

Continuing claims decreased to 2.930 million in the week ended July 24, from an upwardly revised 3.296 million in the prior week, initially reported as 3.269 million.

This marks the lowest level of continuing claims since it was at 1.770 million the week of March 14, 2020, just before the pandemic began to wreak havoc.

“New jobless claims dropped a bit back below the seasonally adjusted 400,000 level, in line with expectations, but remain in territory where they’ve been in recent months,” Hamrick said. “They slipped below the benchmark 400,000 level for the first time since the pandemic began around Memorial Day and have essentially hovered there since.”

Also released Thursday, the international trade deficit widened to $75.7 billion in June from $71.0 billion in May. Economists expected a $73.9 billion shortfall.

“The U.S. trade deficit rose to a record in June, while exports rose by $1.2 billion during the month and imports jumped $6.0 billion,” said Jay Bryson, chief economist and Shannon Seery, economist at Wells Fargo Securities. “The June data largely confirm the preliminary real GDP data for Q2 that were released last week.”

They added that looking ahead, the “strong” outturn for imports in June sets trade up to be “another drag on growth in the third quarter.”

“But with little data yet available for the quarter, it remains to be seen how trade evolves from here due to the rise in the Delta variant in the United States and the severe transportation bottlenecks the sector continues to face,” they said. “The trade deficit likely will remain elevated in coming months due to continued strength in U.S. domestic demand.”

Chip Barnett contributed to this report.