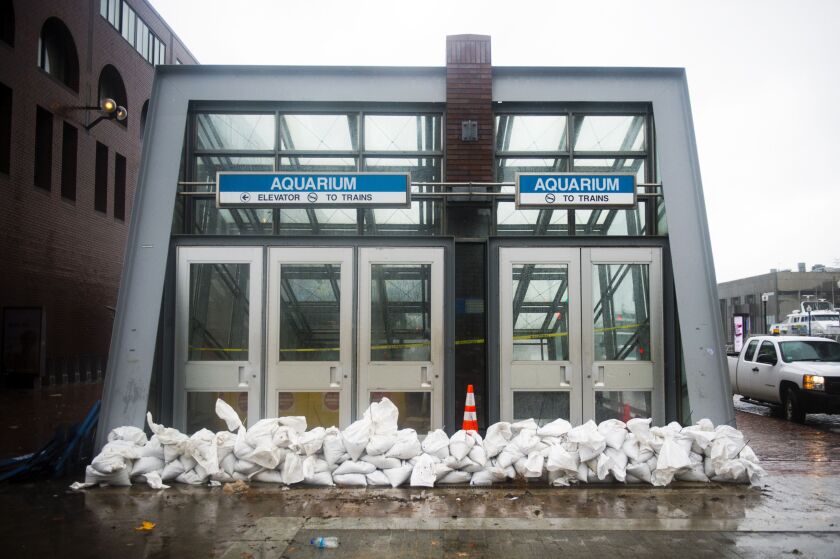 While subway commuters waded through waist-high water at 157th Street, water cascaded down the Dyckman Street subway station, home to the Metropolitan Transportation Authority’s A line.

“These videos are a reminder of more dramatic floods like Hurricane Sandy in 2012, and a preview of what to expect as rain-induced flooding becomes more common and climate change accelerates,” Marcel Negret and Mark McNulty wrote in a report for think tank Regional Plan Association that called for improving stormwater management in the city’s subways.

“Climate change will make those events more intense and frequent.”

In Boston, rising seas pose an “existential threat” to the Massachusetts Bay Transportation Authority’s rail network over the next 50 years, according to a study by Massachusetts Institute of Technology and Tulane University researchers that the MBTA commissioned.

A 100-year storm, for example, would inundate the Blue Line and large portions of the Red and Orange lines — all underground subways — according to researchers. By 2070, a 100-year storm could flood most of the network, the report said, including the light-rail Green Line, much of whose branches are above ground.

Transportation accounts for 44% of Massachusetts greenhouse gas emissions, according to Tom Ryan, senior advisor on policy, government and community affairs for the civic group A Better Boston.

“The region cannot afford to fall back to pre-COVID-19 congested roadways or worse— the commonwealth’s economic recovery and climate goals will be heavily influenced by the performance of public transit system and the number of people choosing mass transit to commute,” Ryan said before the MBTA Fiscal and Management Control Board in July.

According to the group Climate Bonds Initiative, social and sustainability bond issuance rose by an average of 72% per year between 2016 and 2020.

Green municipal bonds issued by local government authorities and state-backed government entities made up 23% of total volume of annual issuance in the U.S.

According to bond documents, the MBTA intends to use the proceeds to finance eligible projects with environmental and/or social benefits. Environmental benefits focus on the transition to low-carbon and climate resilience. Social benefits center on access to affordable infrastructure and socioeconomic advancement.

The range of challenges in both regions is widespread, said climate expert Alan Rubin, a partner at Blank Rome Government Relations LLC and co-head of its severe weather emergency recovery team.

“You have to look at short-term, mid-range and long-term solutions,” Rubin said.

RPA’s analysis said an extreme rain scenario, or “100-year flood,” could affect up to 20% of all 472 New York City subway station entrances.

The state-run MTA has allocated $2.6 billion in resiliency projects since Sandy struck in 2012, including fortifying 3,500 subway openings like vents, staircases and elevator shafts against flooding.

Still, some causes of subway flooding are beyond the transit agency’s control, Negret and McNulty wrote. For instance, at 157th Street and in other neighborhoods, runoff water flooded streets, sidewalks, and stations in July because nearby drains and catch basins were either clogged or not designed to handle the magnitude of these flood events.

“While some observers have rightfully pointed out the subway system was not designed to account for climate change nearly one hundred years ago, the reality remains: our transit infrastructure is still unprepared for climate change, particularly rain-induced flash floods,” they wrote.

“What you saw in a couple of cases was some areas that are [on] a little higher ground but which have some significant problems vis-à-vis adjacent street drainage, and the topography that brought more water into the stairs,” said Lieber, the MTA’s former chief development officer and now interim chief executive.

According to Lieber, the MTA and the city should communicate better about utility work.

“The utility penetrations and the sidewalk penetrations that have been taking place outside of MTA jurisdiction have created a significant water penetration, and we’re addressing it. We’re working with the city and we’re coming up with the money to fix it once and for all,” he said.

“We don’t want to be the water collection point for every neighborhood because there are holes in the ground above us.”

The MTA must deal with a myriad of interests including the city’s environmental protection and transportation departments, plus utility companies and their third-party contractors.

“They work in their own silos instead of working together,” Rubin said.

“Proactive climate change adaptation projects will likely be some of the most expensive we undertake in the next generation,” Negret and McNulty wrote.

“Today we mostly pay for them by retroactively relying on federal funds in the wake of natural disasters. The federal government should contribute funding toward New York’s climate change adaptation needs, but it should be proactive and not reactive.”

Ongoing negotiations over a federal infrastructure bill, for example, could account for “very significant and ambitious” climate-change adaptation.

In Boston, where dumpsters floated through flooded streets in the Seaport District in January 2018, former Mayor Marty Walsh once proposed a seawall around Boston Harbor before his appointment by President Biden as U.S. labor secretary.

The city and MBTA, meanwhile, have collaborated on some projects. The city, for instance, installed posts around the T’s Blue Line Aquarium station, on the edge of Boston Harbor, where temporary flood barriers could also be installed.

He also recommended “French drains,” shallow trenches that collect and channel runoff water into the Charles River. Henry French, a judge and farmer in Concord, Massachusetts, promoted the idea in an 1859 book.