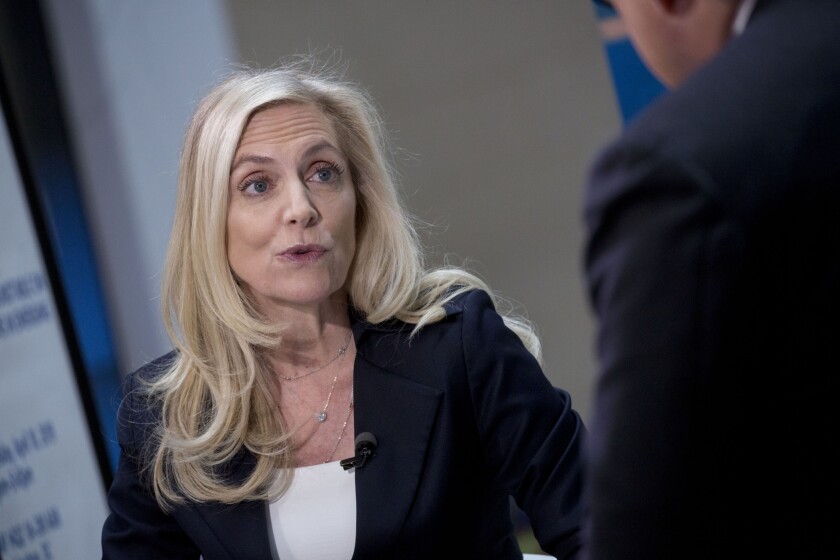 Federal Reserve Board Gov. Lael Brainard staked out some different ground from Chair Jerome Powell as the policy makers await a presidential decision on who should lead the central bank in the coming four years.

Brainard, considered a leading candidate to take over as Fed chief in February if Powell doesn’t get a second term, said she’s much more inclined to use regulatory tools to head off financial excesses like asset bubbles than the Powell-led central bank has been.

In remarks late Friday to the prestigious Aspen Economic Strategy Group, she also exhibited a greater willingness to adopt a central bank digital currency, and a greater eagerness to get on with the decision than Powell has.

The veteran policy maker, though, did line up with Powell on Fed’s raison d’etre, monetary policy, saying the central bank needed to see a further notable improvement in the jobs market before starting to scale back its massive bond purchases.

President Joe Biden isn’t expected to decide whom to choose to lead the central bank until September at the earliest. The nomination would be subject to confirmation by the Senate. Powell’s current four-year term as chair expires in early February.

Dennis Kelleher, president of the Better Markets anti-Wall Street advocacy group, said the choice will probably come down to Brainard or Powell.

Kelleher supports the more regulatory-minded Brainard to head the central bank at a time “when the Fed will have a dramatic impact on Americans’ financial and economic well-being, but also an impact on the agenda and values” of the Democratic president.

Unlike Powell, a 68-year old Republican who was elevated to the Fed’s helm by then-President Donald Trump, Brainard is a card-carrying Democrat. A Fed governor since 2014, Brainard, 59, also served as a senior Treasury Department official in Obama administration.

Brainard didn’t set out to draw a distinction with Powell during her appearance in Colorado. The speech released by the Fed ahead of her appearance there was focused on the economy and monetary policy, areas where her views are seemingly in sync with the chair.

Like Powell, Brainard said in the speech she was alert to the risk of persistently high inflation but didn’t believe that would occur.

“Recent high inflation readings reflect supply-demand mismatches in a handful of sectors that are likely to prove transitory,” she said in the prepared remarks.

Brainard didn’t deliver the speech to the group, though she referenced many of the points it made in a session entirely devoted to questions from Aspen Economic Strategy Group Director Melissa Kearney and others attending the annual meeting.

In her responses, some of Brainard’s differences with Powell came out.

Saying that the Fed’s ultra-easy monetary policy could pose risks to the stability of the financial system, Brainard said she’s “much more willing” than the central bank has been to use macro-prudential regulatory tools to try to prevent that from happening.

“There are some things that we could do there that we just really — there hasn’t been the will to do it in the past,” she said.

In March 2019, Brainard was the lone vote on the Fed Board in favor of requiring the nation’s biggest banks to hold an extra buffer of capital to make the financial system more resilient to shocks.

In her remarks in Aspen, Brainard also suggested the Fed should press ahead toward the development of a central bank digital currency.

“There is urgency around the issue,” she said, noting that China and some other countries have already developed digital currencies of their own.

“The dollar is very dominant in international payments, and if you have the other major jurisdictions in the world with a digital currency, a CBDC (central bank digital currency) offering, and the U.S. doesn’t have one, I just, I can’t wrap my head around that,” she said. “That just doesn’t sound like a sustainable future to me.”

Her tone contrasted with that sounded by Powell to Congress in July. The Fed chief told lawmakers that he was “legitimately undecided” on whether the benefits of a digital dollar outweighed the costs and said it was far more important to get the decision right than to make it quickly.

Powell also played down the risk of the dollar losing its role as the world’s reserve currency now that China has established a digital unit of its own. “We’re not in danger of losing it, certainly not to China,” he said.

At the conclusion of her remarks in Aspen, Brainard received a warm round of applause.

The Economic Strategy Group is a bipartisan program of the Washington- based Aspen Institute. Its members include a number of former Treasury secretaries, including Hank Paulson and Lawrence Summers, former Fed Chairman Ben Bernanke, BlackRock Inc. chief executive officer Laurence Fink, and Brian Moynihan, CEO of Bank of America Corp.