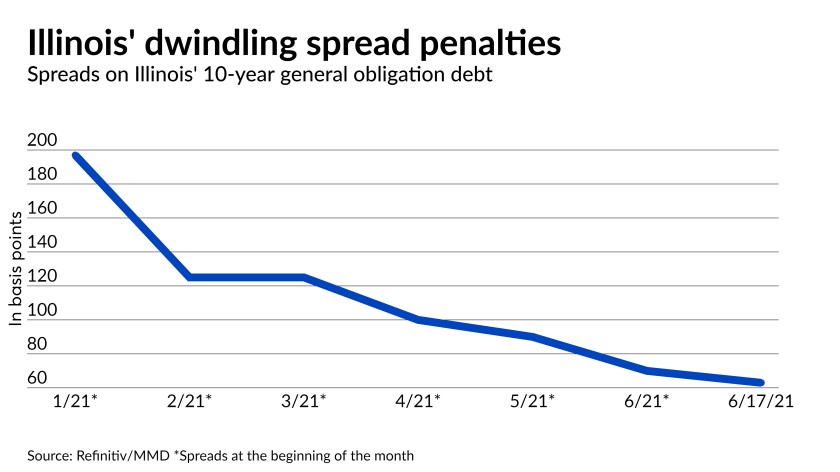 Illinois spread penalties narrowed this month to levels in line with its ratings for the first time in years as the state reaps the benefits of swelling tax revenues, federal cash and a market looking for scarce yield.

Illinois is the lowest-rated state at just one notch above junk. Fitch Ratings, Moody’s Investors Service, and S&P Global Ratings all moved the outlook to negative at the start of the COVID-19 pandemic and Fitch also cut the rating one notch. Moody’s and S&P moved the outlook back to stable in March.

“I think you have the perfect storm,” said Greg Saulnier, managing analyst for U.S. Municipal Bonds at Refinitiv. “Munis have seen 15 consecutive weeks of fund inflows with a lot of that money directed to high-yield funds. Add to that investors starved for yield and an improving credit picture because of federal aid, and, voila.”

“A lot of the sectors and credits that were beaten up during the pandemic have seen spreads narrowing over the last month because of the economic reopening picture and vaccines etc. But no doubt, the move in Illinois spreads has been incredibly impressive over the past six months,” Saulnier said.

While the national economic landscape and market appetites play into the “impressive” spread movement, the state’s near-term rating and budgetary stability are factors too and it was against that backdrop that Gov. J.B. Pritzker touted the state’s fiscal progress on Thursday. Later in the day, he signed the fiscal 2022 budget package that includes a $42.3 billion general fund.

“By signing the state budget today, Illinois is taking a giant step forward, toward true fiscal stability,” Pritzker said. “We balanced the 2022 fiscal year budget independent of the American Rescue Plan … and passed a budget that meets the moment. Together, we are putting Illinois on the right track.”

The state expects to repay short-term borrowing done in fiscal 2021 during fiscal 2022 with higher-than-expected revenue collections. The state’s $1.2 billion June 2020 loan from the Federal Reserve’s Municipal Liquidity Facility is being retired this fiscal year and the state’s December 2020, three-year loan for $2 billion will be paid off with $1 billion of surplus revenues at the end of fiscal 2021 and the remainder in fiscal 2022.

Illinois’ bill backlog, which hit a high of $13.7 billion in the fall of 2017 just after the state’s two-year budget impasse ended is now down to between $3.2 billion to $3.5 billion, a level Comptroller Susana Mendoza recently said allows the state to pay its bill on a normal cycle.

Illinois in May revised its revenue estimates upward by $1.47 billion for the current fiscal year and $842 million for fiscal 2022 due to strong individual income, corporate income and sales tax collections. Democrats who hold a super, three-fifths legislative majority, approved the budget at the end of May.

The state had intended to use a portion of its $8.1 billion of American Rescue Plan Act relief but U.S. Treasury’s initial guidance barred using funds to retire outstanding debts, and though the state began lobbying for a change, it opted then to use its own revenues. The budget also repays other internal fund borrowing used to manage the early tax losses from the pandemic.

The budget funds the $9.8 billion pension contribution but that’s one of the key drivers of the state’s long-term structural woes as the payment is based on a statutory formula based on an amortization schedule to reach 90% funded in 2045 and it falls far short of an actuarial level. The state’s $141 billion unfunded pension tab weighs heavily on the state’s ratings and on investor minds.

The budget does put in a dent in the state’s structural imbalance with $655 of new revenue the state will get to hold on to by eliminating various corporate tax incentives. The GOP minority slammed the move especially given business struggles during the pandemic and considers the measures tax hikes that contradict Pritzker’s characterization that the budget lacked any tax increases.

While the state hasn’t made any headway in tackling pension strains, the administration hopes to turn the progress into managing the pandemic and its improved structural position into an upgrade as analysts have stated several of the state’s accomplishments as factors that could help that cause.

The GOP is pressing Pritzker to use some ARPA funds to cover a $5 billion gap in the state’s unemployment trust fund as some other states have done but the administration is waiting to see if further help might come from the federal government on that front.

Dan Hynes, the state’s former comptroller who was an early advisor to Pritzker and steered fiscal management as deputy governor for oversight of the budget, revenue and economic development issues, will leave this summer.

Market participants considered Hynes a steady and reassuring fiscal hand given Pritzker was a political novice when he took office in early 2019. “I’ve known Dan for an awfully long time, and I asked him to join my administration because I knew I needed his unparalleled knowledge of the state budget and his well-deserved reputation as a fiscally responsible leader and as you can tell he delivered,” Pritzker said Thursday.

Hynes left his position as a senior executive UBS Asset Management to work for Pritzker. He served as comptroller from 1999 to 2011. Hynes had led Pritzker’s transition budget working group.

“When I left the comptroller’s office I really had no intention of going back into government and the main reason I did is because of my incredible respect for Gov. Pritzker and also from a personal standpoint I felt there was some unfinished business, that the state still had a lot of financial problems and I could offer something to that,” Hynes said.

Hynes, who said professionally he will return to the private sector but hopes to remain involved in government on a volunteer basis, said Pritzker shares his believe that fiscal stability is a top goal and believes “we’ve gone a long way toward achieving that.”

Hynes’ role will be filled by former state Sen. Andy Manar who joined the administration as a senior advisor earlier this year. “He comes with a deep well of respect all across the state, and he will provide immeasurably important perspective in this new role,” Pritzker said.