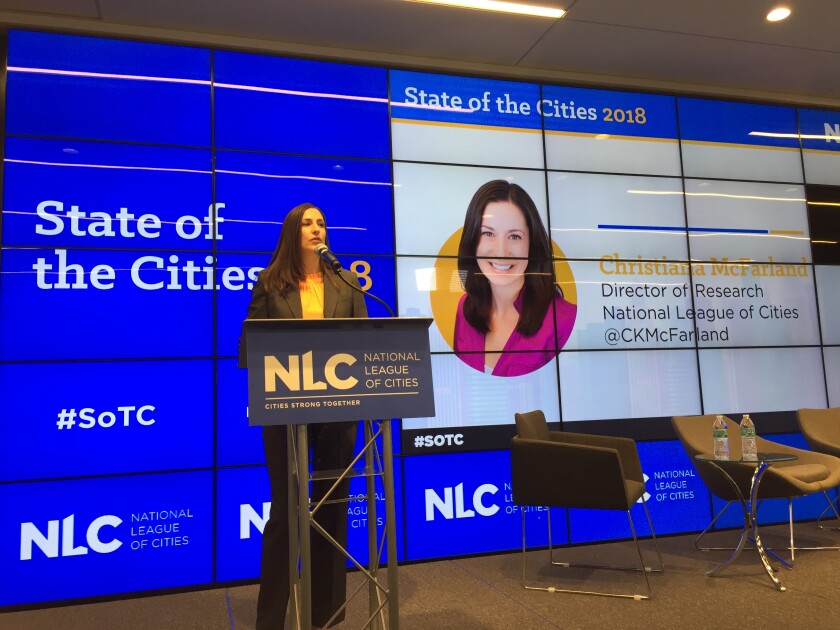 The pandemic has highlighted the importance of basic functional infrastructure, budget management and affordable housing to the vitality of cities.

That’s the takeaway from the 2021 State of the Cities report released Thursday by the National League of Cities. Nearly 600 cities, towns and villages were surveyed along with 57 mayoral speeches that provided additional context.

“From clean drinking water to parks and open space, the most crucial elements of community resilience in the face of COVID-19 were aspects of everyday life that we often take for granted,” the report said.

“Infrastructure funding, however, ranked among the top challenges facing cities, driving infrastructure to the top of mayoral priorities for 2021.”

Christiana McFarland, director for the NLC’s Center for City Solutions, said infrastructure has been a longstanding top issue for city leaders in prior surveys, but the pandemic highlights its importance.

“These are not necessarily infrastructures that will always be there for us,” she said. “We need to take care of them and we need to maintain them and invest in them.”

The NLC survey found the availability of broadband and digital connectivity improved in about three in 10 urban core and rural communities over the past year, while 18% of suburban and 21% of exurban officials reported improvements.

Twenty percent of city officials surveyed also identified the availability of broadband as a leading positive driver, while 15% indicated it as an area that posed one of the most significant challenges for their community over the past year.

Budget management ranked as the second top issue because pandemic-related shutdowns caused a revenue shortfall. The survey found 14% of cities had a decline in total revenues over the past year, with 17% indicating total general fund revenue as one of the most significant negative conditions affecting their communities.

Public safety and the related calls for social justice ranked third in the survey followed by commercial decline and the need for small business emergency assistance as fourth.

Although housing ranked only No. 5 in the survey, rising housing prices in many locations around the nation since the onset of the pandemic has raised important affordability questions.

McFarland said the top priorities have remained consistent in recent years but the pandemic exacerbated the economic inequities.

“Increasing home values are sort of a boon, particularly for the wealth of homeowners who are able to afford a home, but it also underscores a significant challenge of building and investing in affordable housing,” McFarland said.

Mayor Cyndy Andrus of Bozeman, Montana said that the availability of land for building new homes is limited and the price of raw materials such as lumber and steel has risen as much as 300%.

The median home price in Bozeman is currently around $700,000, Andrus said.

“Bozeman is located in the beautiful part of the country and we’re close to Yellowstone National Park,” said Andrus, who added that the pandemic has contributed to the inmigration of new residents who are able to work from home.

Bozeman residents “overwhelmingly passed a ballot measure that created a property tax that supported parks and trails,” the mayor said. “The pandemic really showed us how much people of all ages value parks, and now is the perfect time to invest and upgrade and modernize.”