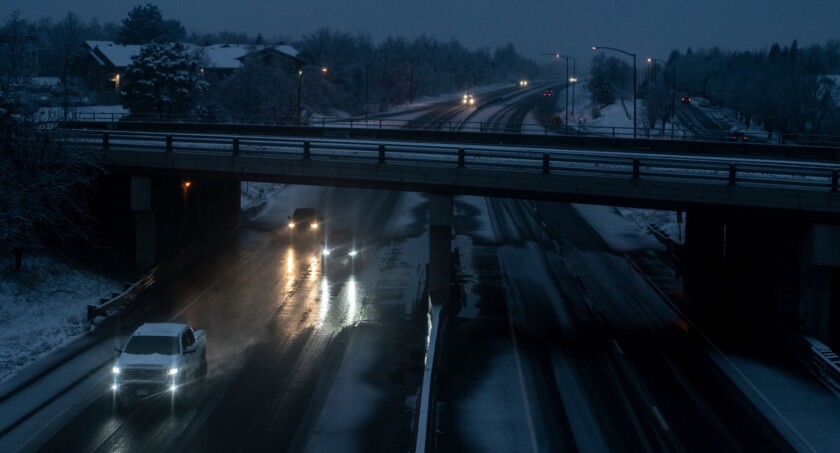 A $5.3 billion transportation bill awaiting Colorado Gov. Jared Polis’s signature will not require voter approval after Republican demands for a referendum were thwarted.

Senate Bill 21-260, which won final passage in the state House of Representatives last month, provides $5.3 billion over a decade for highways, bridges and infrastructure for future electric vehicles.

The legislation passed on a party-line vote after years of failure to win voter support for transportation funding mechanisms.

“We’ve been working on trying to fix transportation funding in this state for decades,” said House sponsor Rep. Matt Gray, D-Boulder. “The last adjustment we made to the gas tax we rely on as our primary source of revenue was 1992.

“We have been struggling to solve the problem of that diminishing resource since then,” he said during floor debate. “Senate Bill 260 represents a solution to that problem, by modernizing how we pay for transportation.”

With state revenue limited by the 1992 Taxpayer Bill of Rights, lawmakers had to make moves that Republicans called an “end run” around TABOR requirements for voter approval of any tax increase.

Before final passage, SB 260 was stripped of a provision requiring voter approval of $1.3 billion of transportation revenue anticipation notes in November.

A Republican amendment requiring a vote on the entire package known as Sustainable Transportation System was also defeated on a party-line vote. Democrats control both houses of the General Assembly, along with the governor’s office.

House Minority Leader Hugh McKean, R-Fort Collins, led his party in a parade of floor speeches favoring a referendum on the legislation.

Another defeated Republican amendment sought to change the word “fees” to “taxes” in the bill.

House Speaker Alec Garnett and Gray said that everything in the legislation conformed to TABOR.

“The distinction between a tax and a fee predates the Taxpayer Bill of Rights,” Gray said. “The actual practical effect if you turn this into a tax is that the money can be diverted to other uses. Under this bill, money has to be spent on transportation and can’t legally be spent on other things. If it’s a tax, we could use it for whatever we want. This guarantees that the money is used for this purpose.”

The legislation creates five government enterprises supported by fees, including a fee of 2 cents added to a gallon of fuel at the pump.

Under the bill, existing taxes plus more than half a dozen new fees totaling $3.7 billion over a decade will pay for road repair and electric vehicle incentives, electric public transit vehicles, environmental mitigation and more. Another $1.484 billion will come from the state’s general fund and one-time stimulus funding.

Republicans said they wanted to limit spending to “asphalt and concrete” and add $100 million for rural highways that Republicans said compare poorly to those of adjoining states.

Republicans pointed to last year’s voter approval of Proposition 117 restricting fees that were exempted from the TABOR provisions. Prop 117 required voter approval or refunding for any fees for an enterprise that raised more than $100 million in a year. To get around that limit, Democrats divided the enterprises in a way that no program fees met the Prop 117 threshold.

The fees support government enterprises that were authorized under the original TABOR amendment to the state Constitution.

Under TABOR, any money collected above the TABOR limit is refunded to taxpayers unless the voters allow the state to spend it.

Republicans said the rising fees have drawn complaints from constituents.

“I cannot think of an approach to transportation funding or any other funding that will have a greater impact on public cynicism and distrust than a provision that ignores what they told us last year — that they want approval on these fee increases,” said Rep. Terri Carver, R-Colorado Springs. “So, chopping it up into five enterprises to get it under the threshold, they know what this is. It’s an end run around what they said last November. Take the issue to your voters and make the case.”

Supporters of SB 260 and its companion SB 265, led by Polis, promoted the bills as a long-term solution to the state’s chronic underfunding of transportation. Polis has already said he plans to sign the bills.

Because its constitution forbids state general obligation debt, Colorado issues certificates of participation secured by lease revenues on state buildings. The most recent issue of $500 million for rural highways came in May. Even that issue came with a bond counsel warning that litigation challenging the funding mechanism awaits a state Supreme Court ruling.

Similar court challenges could await the transportation funding. But Democrats in the House said they have worked for months to craft legislation that could pass muster with TABOR.

“The states that are neighboring us have already solved this issue, not necessarily in the way that we do with Senate Bill 260, but they have increased their taxes,” Garnett said. “In Utah, their gas tax is 9 cents higher than ours. When you look at the fuel usage fee, we don’t even get to that point with Senate Bill 260. But Senate Bill 260 is going to help us. It is aggressively reasonable. And it is going to get us to a point where we know the market is going.”